The canary drago, part of the Canarian cultural identity, and is considered along with the canary island palm, the canary pine and other plants of the islands, as one of the symbols of the Canary Islands.
Aboriginal, represented the earthly manifestation of a protector god and worshiped the dragos as places of special power and significance, using the sap as a healing substance.

Myths and legends have enveloped the dragon trees from the most remote antiquity. Greek mythology has it that when Hercules entrusted the known "twelve labors" one of them was to find the golden apples from the Garden of the Hesperides (the three daughters of Atlas). This garden, according to legend, was located in the Canary Islands and was guarded by a fierce dragon named Ladon hundred heads. Hercules, after a long journey, he met Atlas, condemned to carry the weight of heaven, who said he knew where he was the Garden and offered to bring the golden apples in exchange for holding the heavens titan meantime. Atlas Ladon killed, and the blood from his wounds mortal fell on the Garden of the Hesperides, is that each drop was born drago. Ladon, the ancient dragon still be alive, therefore their children, the dragon trees. 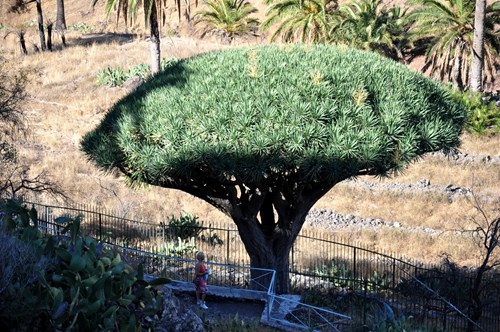 One of them is the Drago Agalán, with more than 400 years, is the oldest drago of La Gomera and also the larger issue. Regarded as a symbol of La Gomera, is located in the southern municipality of Alajeró, appears in the heraldic shield of the municipality. It is located in a beautiful covered ravine called Tajonaje agaves.
From the main road to Alajeró several kilometers before reaching the town, by a descendant way you can visit this magnificent dragon tree. The route on foot can last about 15 to 20 minutes.
Some stories and sayings canaries still have today regarding the dragon tree. According to people over the islands, you can learn how to be rainy year, watching flowering of imposing dragon. "Flowery Drago, rainy winter." 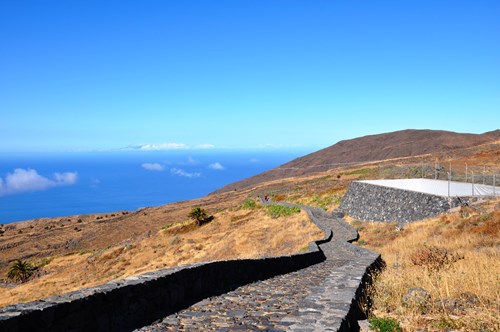 It is the only plant in the world whose sap is red (its original white color, turns red when it comes into contact with the air). A sap, known as "dragon's blood" attributed to him, since time immemorial, magical properties. Powders, ointments, cosmetics and even varnish to paint Stradivarius violins have been some of their most common uses.
Its growth is very slow and in good condition grows one meter every 10 years. Centenarian ages and reaches its first flowering occurs at age 15.
Unlike trees, if we want to know your age we can find not counting the growth rings because they do not have. Age is determined by counting the number of branches having its branches. The drago branches after flowering and this happens every 15 years, so you see one of these specimens in bloom is all a very unique show.
Now, you know how to know the exact age of a drago, we invite you to tell yourself the ramifications of the legendary Drago of Agalán and tell us how old are you ... although you have already given a clue ... has more than 400 years! Good luck!