The legend Anahí and kapok flower

If you have taken a walk around our garden, perhaps you've seen those beautiful red flowers arranged in showy clusters... kapok flowers. 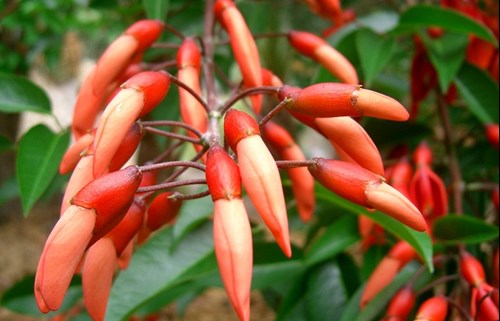 This plant and its showy flowers, there is a legend and many versions... this is one of them:

Legend has it that in the lands bathed the Paraná River, lived an Indian called Anahí, belonging to the tribe "Guayaquí" family Guarani. His men and women are characterized as bellicose and indomitable, jealous defenders of their land and home.

Anahí, passionately loved her land, roamed the forests alone, knew every corner of the woods, all the birds and flowers that peopled ... They say there was graceful beauty, with even the ugliest of them all, but had a voice so sweet and beautiful to listen ... no one remembered that he had a graceful little face. When she sang, to the babbling river it seemed silent to listen. She had a noble and brave heart in a small body.

But one day, echoed through the jungle a strong rumor that the river ... the noise of weapons of strange white-skinned men, who traced the waters and into the jungle. Anahí tribe defended from invaders. Without hesitation, the young Anahí joined her tribe warriors to defend their home. Her voice no longer sang again, shouting revenge and war, encouraging men and women of the tribe. No one would have suspected so fiercely in a dark little body so small, but, seeing their loved ones fall gave him strength to keep fighting.

After a bloody struggle Anahí was taken prisoner, sad and lonely not lost its power and even sang at times. One night, in an unguarded moment the sentry guarding her, Anahí managed to escape violent dealing a blow to the neck, but could not get very far ... the wounded soldier was killed but his groans alerted the rest to catch up soon. She was accused of being a witch, because it was hard to believe that with that little body and her youth had killed a soldier without any help of the devil and was condemned to die at the stake.

Tied to a tree by the river bank, stacked firewood at his feet and set it on fire. To the amazement of those who watched the scene, Anahí began to sing a song in which he asked his God for their land, forests, rivers, their tribe. With the first rays of sun, the soldiers watched dumbfounded as the body of Anahí had become the sturdy trunk of a tree beautiful hanging clusters of red young flowers, as red as the flames had consumed her. These flowers were displayed in all its glory, as a symbol of courage and strength to suffering.