If you visit San Sebastián de La Gomera a must visit is the famous Torre del Conde, in addition to discovering its beauty can learn more about the medieval history of La Gomera, because is one of the few medieval fortifications which subsists in the Canary Islands, besides being the oldest building in La Gomera.

It was built by Hernán Peraza "El Viejo" between 1445 and 1450, when La Gomera was an island "at the end of the world" by early settlers, conquerors and conquered, violence ... therefore it was necessary to build a tower whose function outside repel attacks "indigenous" gomeros. 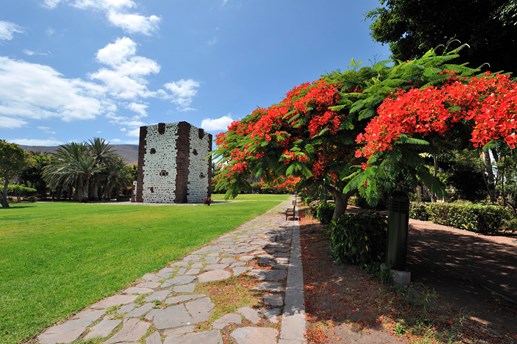 Beatriz de Bobadilla her, her children and some neighbors fled in 1488 to fend off an uprising of gomeros after the death of her husband Hernán Peraza "El Joven".

The Torre del Conde lost its military sense in the sixteenth century, when San Sebastián de La Gomera was forced to build forts designed to repel the attack of pirates. Damaged for this reason, it was rebuilt and restored several times. Throughout its history it was used as a refuge, as a warehouse, as tinderbox, etc.
Today at an important point of interest in La Gomera and surrounded by beautiful and extensive park La Torre. Its interior can be visited.