Christmas is almost here now! An enchanting, magical holiday in which the family meets and old traditions are recovered. One of the most beautiful times of the year, where the excitement and illusion of small, togetherness, love, generosity and friendship are the protagonists.

Of the seven Canary Islands, La Gomera, it is the one that conserves the customs and traditions of more pure way, for that reason, this island, becomes an ideal place to spend an unforgettable and different Christmas.

In La Gomera, music has always occupied a privileged place, even today, the streets of some towns of La Gomera become the scene of lively parrandas that sing songs in the nights near Christmas and during their celebration.

Groups known as "The Divine" are some of the most deeply rooted traditions in La Gomera and the Canaries. These groups or parrandas cross the streets, singing carols since early December. 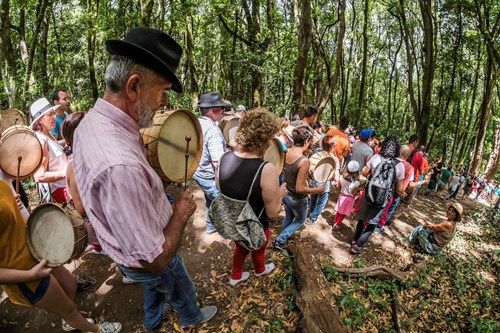 These groups are composed of instruments such as guitars, bandurrias, timbres, tambourines, triangles and castanets. In other times, these groups also went from house to house and asked for a Christmas bonus, singing not only carols but also songs related to the generosity or shortness of the Christmas bonus. This was used for various purposes, such as raising funds for the local holiday or sharing it among the poor. In the houses they were offered a glass of new wine, some "rosquetes", some sweet trout ...

They owe their name to sing to the divine as opposed to the terrestrial and to the well-known carol and sung of the Canary Islands, "Lo Divino", considered as the popular canary carol par excellence. The customs of each place and the passage of time have given different variants to this villancico in each island. The music was composed by the Canarian composer and performer, D. Fermín Cedrés Hernández. As for the lyrics, some monographs attribute it to the writers Ramón Gil Roldán, Diego Crosa "Crosita", the Presbyter Santiago Martín Beyro and the singer Néstor de la Torre. However, there are also works, such as that made by María Victoria Hernández (Diario de Avisos 2001), which are attributed to the Cordovan poet Antonio Fernández Grilo, according to his poem from 1871 titled "The two good nights."

Announce our singing
That the Redeemer was born
The earth, the sky and the sea
Palpitate filled with love.

The horns and the clarinets
The drum and the timpani
Announce the birth
From our heavenly God ...

"The New Years" is another important Christmas tradition, "parrandas" are going the night of Year-End and the Eve of Kings, singing songs from house to house. The lyrics improvise and allude to the moment as well as the people who live in the house, especially the girls. The chants were accompanied by old houses and tambourines, but later they were added to the chariots (a bell similar to the bell) to announce the arrival, guitars, timbres, violins, accordions, etc. In the upper parts of the island (Chipude, Guadá and Estanquillo), even today, you can hear a very old variant, the so-called "New Years Engaged" or "Englosados ​​New Years" interpreted exclusively by drum. In the interior of the houses, parranderos are offered sweets, homemade rosecars, gofio mixed with honey, raisins, sweet potatoes, almonds, wine ... not staying inside them for more than half an hour, enough to recover strength and to continue with the travel. Each village and each neighborhood has its own way of singing the New Years, although the scheme of singing and the way of carrying it out are very similar: the guide improvises the songs and the choir repeats them. The chants are hexasyllabic verses and the rhyme can be assonant or consonant.

During the Christmas celebrations in La Gomera you can enjoy many activities related to these parties: Nativity scene, craft markets, performances by folk groups, music festivals, Christmas workshops, the Three Kings' parade on January 5th ... everything accompanied by the exquisite typical dishes and artisan baked goods that are made on the island. But of the Christmas delicacies of La Gomera we will speak in another post.