The waters off the coast of La Gomera, like the rest of the Canary Islands are oceanic. The quality of these waters has been internationally recognized for its transparency, with visibility that can exceed 30 meters and a temperature ranging between 17ºC in winter and 24ºC in summer.

The underwater landscape is composed of various rock formations, mainly of lava and basalt stone, a wonderful seabed littered with mountains, gorges, caves, bridges, nooks and reefs with great depths that in some cases reach thousand meters.

In its waters, they are given appointment species that abound in cold North Atlantic waters (Arctic influence), temperate species (tropical influence), animals that live on the eastern shores of America, especially in areas of the Caribbean Sea and Gulf of Mexico and some endemic species whose distribution is restricted to the Canary Islands. 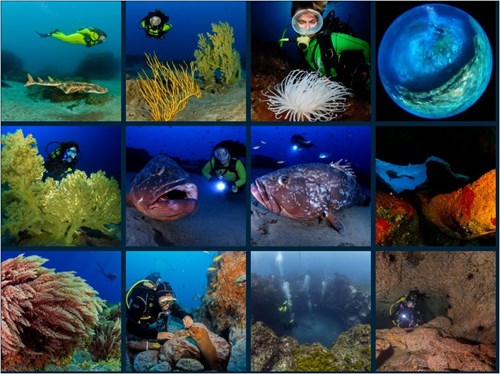 The most prominent immersion points are located throughout the island; in the North, organs. In the West, Punta Nariz with rocky bottom and fauna varied and Roque de Iguala with high walls and small caves. In the East, Hermigua, Punta Majona, Roque del Hero, where you dive to a depth of 6-22m. with many cracks and crevices, from 20m. sand; moray eels and barracudas duckbill and Punta Avalo, depth between 10 and 30m. cliff diving in; dolphins, tuna ... Cuevita beach in San Sebastian de la Gomera, a perfect area for night and whale species like barracudas, eels dives, and hopefully giant turtles or sunfish. In the South Freshwater is a steep wall with large basalt stelae where we find shoals of fish, groupers and blankets.

In recent years, the popularity of diving and underwater photography, have increased exponentially, providing marine biologists new information about the marine life of the islands. Among the species of fish found in the islands many shark species (the Jaquet, hammerhead and Sardinian), swordfish, wahoo, bream, old, grouper, haddock, green pejes, castanets, trumpet fish, fish included parrot, tiger fish ... that make up a typical genuine multicolor zoo subtropical waters. Mammals such as dolphins, pilot whales, pilot whales, sperm whales, killer whales etc. Five species of turtles: loggerhead, green, hawksbill, leatherback and olive ridley, loggerhead being the most frequently be seen. Among the rocks we can find "morenas" and can also discover the goby and sea bass. In addition, there are many invertebrate species like sponges, jellyfish, anemones, crabs, shellfish, sea urchins, starfish, sea cucumbers and corals.

In our Club Laurel we have a dive center contact office, if you are planning to discover the marine fauna of La Gomera, head over there for more information and hire your tour.