Fennel is an aromatic plant that gives off a pleasant smell of anise and has many medicinal properties. It contains, among others, vitamin B3, provitamin A, vitamin B6, vitamin C and minerals like phosphorus, potassium, iron, magnesium, calcium ... It is a potent antimicrobial, antipyretic, antioxidant, antispasmodic, diuretic, digestive, choleretic (stimulates the production of Bile by the liver). Its high flavonoid content has estrogenic effects that stimulate the production of breast milk. As a good source of fiber, it helps to lower cholesterol and could help remove cancerous toxins from the colon.

It has been used throughout history by different civilizations for therapeutic purposes. In ancient China they used it against serpent bites, in Ancient Egypt it was used as a remedy for bad digestion, in India it was considered as a "pearl of aphrodisiacs" forming part of supposedly exciting potions. During the time of Roman domination of Mediterranean Europe, in addition to being used as an aphrodisiac combined with other spices and aromatic herbs (ginger, coriander, saffron ...) was smoked in a pipe or ceramic hookah. It is thought that it would be during this stage of history in which the seeds of fennel began to be used as flavoring of sauces for the meat and to be consumed in the natural the fresh shoots. In the Middle Ages it was called the holy herb, for it was said to drive away the evil spirits, it was customary on the eve of the summer solstice, to hang a bunch of fennel on the door of the house to ward off evil spirits and undo the designs of witchcraft. 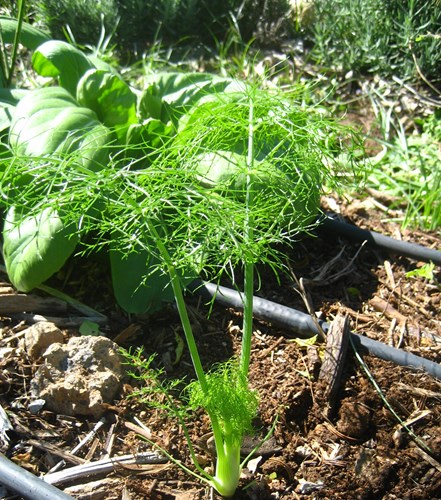 Fennel, a perennial herb that can reach 2 meters in height, is usually found in temperate zones around the planet, along the roads, in uncultivated fields and near the coast. It is cultivated easily, although it is not a good companion in the garden since it inhibits the growth of nearby plants especially tomatoes, beans and cabbage, being itself inhibited by the absinthe and cilantro. However the fennel plant with flowers, attracts all kinds of insects like bees, wasps, syphides etc that allow to maintain the natural balance of insects in the garden.

Of this plant, everything is used, although they are collected at different times of the year; The leaves, all the year, although the best time is in the summer season, the fruits, from where the seed is extracted, when they are ripe and even the roots in autumn.

Its uses are varied, serves to combat digestive problems such as acidity, excess gas, bloating, indigestion and inappetence; It can also serve, in infusion, to remove colic. It alleviates respiratory problems, such as cough, asthma and bronchitis, because being a natural antispasmodic makes the bronchial relax; Is very useful in the treatment of cholera, in urinary incontinence, vision problems. It is used to clarify and strengthen eyesight as well as relieve irritations of tired eyes and conjunctivitis. It also helps to kill kidney stones. It can also break down obstructions of the liver and gallbladder, and with problems like gout and jaundice. Seed oil is used to lose weight, as a metabolism enhancer and appetite suppressant. It can also be used to gargle for sore throats

In the kitchen, fennel seeds are used dry to prepare bakery of all kinds, sauces, soups and salads. Bulbs are often used in various dishes as an ingredient to promote their digestion. It is used in the preparation of pickles, dressings and sauces for its aromatic smell and digestive character.

It is also used as a flavoring in toothpaste soaps, perfumery, air fresheners ... The dry plant is an excellent insect repellent, crushed leaves are effective to keep dogs free of fleas.

If you want to know first hand how to grow fennel in an ecological way and deepen the knowledge of its many properties, we invite you to visit our Eco Finca Tecina, every Tuesday at 10:30. You can see for yourself how the products of our garden come to your table without pesticides and fertilizers, a real source of health to your palate.