Like all the Canary Islands, La Gomera is volcanic. The island has about 12 million years old. Also it is known as the Columbian island, because it was a place of supplies of Christopher Columbus before departing for "the New World" in 1492.

Despite its small area, 369.76 square kilometers and a relatively low height, peak Garajonay, with 1,487 m, is the second smallest Canary Island, covering many different landscapes in a short space.

They are typical of La Gomera many gorges up to 800 meters deep, born in the central area and down to the ocean like a star. There are both rugged and wild places, as gentle valleys, now covered terracing cultivation and palm trees. They can also be seen, scattered throughout the island, it weathered rock towers, which come from ancient volcanic craters, especially in the beautiful circus of Los Roques, we can find the Roque de Agando (photo). 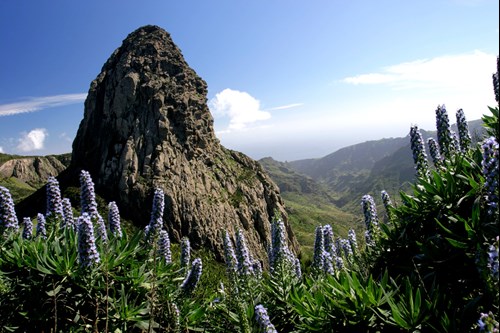 La Gomera has The Garajonay National Park, established in 1981 and subsequently named by UNESCO as a World Heritage Site. It houses a natural jewel itself Tertiary period: laurisilva. Such subtropical vegetal formation is formed by a variety of trees that retain their foliage throughout the year thanks to the high humidity and mild temperatures.

In Garajonay you can be found faille, heather, laurels, ferns, etc. The area affected by the so-called sea of ​​clouds, so that condensation of water vapor in the leaves of trees (horizontal rain) increases considerably the amount of water in the ground. The park can easily be traversed thanks to the many paths that cross, paradise for walking and hiking. The island has hundreds of native plants and animals that make it rich in biodiversity.

From our blog we want to show you the wonders of La Gomera and all that this beautiful and wild island can offer you.