At the gates of spring, the sun caresses La Gomera with greater intensity and the days are longer. Taking advantage of these circumstances, we propose an interesting spring trip for the volcanic past of La Gomera.

Across the island, impressive rocks of basaltic stone arise, these rocks, are old lava chimneys of the volcanos gomeros. The erosion of millions of years, has solidified its interior, conferring to each of them, a singular form. The most impressive are the twin rocks of Pedro and Petra and those that are part of the Natural Monument of the Roques: the rock of Agando, the rock of Ojila and the rocks of La Zarcita and Carmona.

Strolling by the base of these majestic rocks, imposes... their size, antiquity and size... Stand out from the green roof of the island as natural lookout La Gomera. 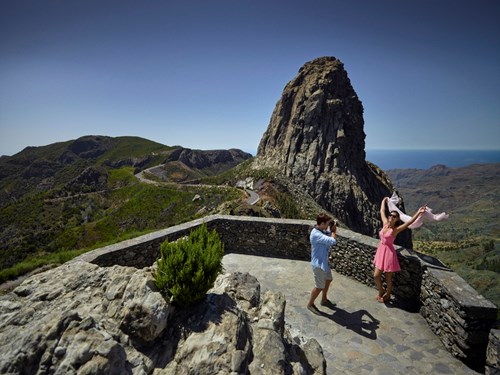 The majestic rocks of Agando, Ojilla, Zarcita and Carmona, are located between the head of the two biggest ravines of the island, Benchijigüa and La Villa, which further accentuates its verticality. The green mantle, covering this area, is splashed with spectacular colors thanks to an interesting flora composed among others by the arbutus, cedar or blue tajinaste.

The set of viewpoints of the Roques, offers beautiful views of this antediluvian landscape, as drawn from a Jurassic film. The ancient inhabitants of La Gomera were also attracted by these magnificent colossi. They worshiped their divinities in high places, building on their summit altars and areas of animal sacrifice. The Roque de Agando is a clear example of this.

The whole area is part of the National Park of Garajonay and is also a Natural Monument, which underlines the values ​​that distinguish this impressive environment.

The rocks of Pedro and Petra, are another capricious volcanic formation that dominates the high valley of Herrmigua. It tells the popular legend that they were two lovers fused in a hug that a lightning turned magically into stone. The impact of the lightning separated them and condemned them to be two rocks that will be watched for the rest of eternity. They are part of one of the most beautiful landscapes of La Gomera, surrounded by beautiful mountains carpeted trees Garajonay National Park.

The Town Council of Hermigua, last year 2016, requested that the rocks of Pedro and Petra were declared Natural Monuments of the Canary Islands. Natural Monuments can be geological formations, paleontological sites, spaces or elements of nature constituted basically by formations of notorious singularity, rarity or beauty, that deserve to be object of special protection. The Roques de Pedro and Petra comply perfectly with this definition.

We encourage you to fit your walking boots so that you can live in first person the beauty of the landscapes that will offer you the rocks of the island of La Gomera.