The giant lizard of La Gomera

However, in 1999, a team of zoologists from the University of La Laguna "rediscovered" the giant lizard of La Gomera, thanks to the testimonies of some inhabitants of Valle Gran Rey who assured that they had seen it and also captured some of them.

The number of giant lizards raised in captivity has increased to an about 400 specimens after its "rediscovery" due to a recovery plan made specifically for this reptile. It is believed that there are about 300 of them living in their natural habitat in Valle Gran Rey, according to the census conducted in 2009. Therefore, we can take a much more optimistic view of this animal conservation. 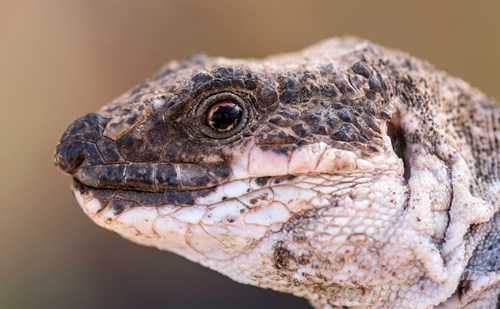 There are some pieces of evidence that giant lizards were present on all the islands of the Canary archipelago, but nowadays we can only find it on the islands of El Hierro, La Gomera, Tenerife and Gran Canaria. Unfortunately, the giant lizard Gomero is the only one in danger of extinction despite the number of individuals living in captivity and in their own habitat.

The giant lizard of La Gomera (Gallotia bravoana) is a large saurian; it can reach almost a half metre in snout-vent length (SVL). This species is endemic to the island of La Gomera and its scientific name comes from the Canarian paleontologist and geologist Telesforo Bravo.

This reptile is characterized by having a big and strong head and it is dark brown to black with blue ocellus arranged in a group or patch on each side of the body; the bottom of the legs and the belly are whitish.

The habitat of this specie was affected by the arrival of humans 3,000 years ago and in the 15th century by European settlers. The human presence produced a strong impact on their natural habitat. In addition to the deforestation and destruction of dragon trees, pine forests, nurseries, and cardinals; the animal species such as goats, sheep, pigs, rats, dogs and cats introduced also contributed to the decrease and almost extinction of the giant lizard. All of this has led them to hide in refuges of difficult access like in ravines and cliffs. 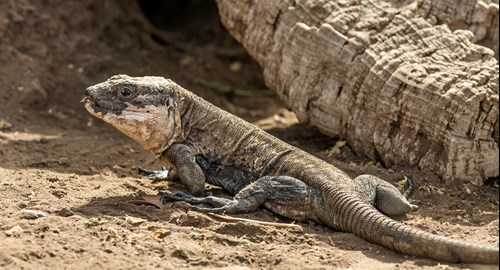 The greatest potential threat to giant lizard are animals introduced by humans. Due to its large size and slow movements make them easy prey for cats and particularly for the wildcat, which is its main predator.

The rats are another threat they face since they can eat the eggs and destroy the stakes when digging them up, even the goats can be another possible dangerous predator, especially in periods of drought or lack of resources.

Currently there are two big populations of giant lizards, one is raised in captivity in a recovery centre (Centro de Recuperación del Lagarto Gigante de La Gomera) and the other one is in its natural habitat on La Merica Cliff, both located in the municipality of Valle Gran Rey in La Gomera. Today, we can be much more optimistic about the conservation of this animal than a few years ago, although it remains as one of the most threatened species in the world.