The Legend of Princess Orone

La Gomera is an island that lives its ancient traditions, handed down from generation to generation by the local people. These are natural and supernatural facts, with a greater or lesser historical base that have survived over time through stories, songs, stories, myths or legends, where mysterious lights, pirates, witches, conquerors, kings, princesses, rebellions or tragic loves ... are the main protagonists.
Many children from La Gomera, have grown up listening, legends like the one of the Princess Orone whose history we are going to tell to him next.

Orone, was a princess who lived in the fourteenth century and was the daughter of King Anhagas, head of one of the four cantons in which the island was divided, Ipalán.
From a very young age, she stood out for her beauty, her inexhaustible energy and her desire to learn. She showed great interest in everything around her and was always asking questions of the elders. She loved games, racing down the slopes with his wooden stick (“astía”) and fighting, usually organizing clashes that she almost always won thanks to his great dexterity.

Orone grew strong and dreamy and dedicated to all the typical tasks of the time she occupied, such as tending cattle, milking, making cheese, fishing, shelling and tanning.
On the day that she released her new white-fur tamarco (a garment made of sewn goat skins) she met her great love, Acorama, a young warrior from the neighboring canton.
Each evening they escaped to the mountain, sneaking, but one morning, Tixiade, the witch, warned him not to climb the mountain because something terrible was about to happen. Orone ignored the advice of the witch, and went up the mountain to meet his love. 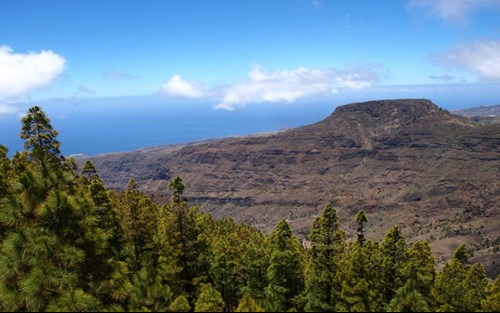 While she was on the mountain, walking with Acorama, chaos broke out on the island. They had arrived, that same afternoon, ships with armed men who landed in La Gomera, fear and confusion reigned in every corner, Orone and Acorama, oblivious to danger, took leave at dusk like any other day.
When the princess was coming down the slope, helped by her “astía”, a young newcomer came up to her, spoke abruptly to her in an unknown language, and she, frightened, ran away. While Orone whistled for help, he laughed and tried to catch her. Lost in the night, poor Orone panicked, she slipped and fell down a ravine.

The next day, they found her dead, she seemed asleep on the flowers. Legend has it that when they lifted it from the ground, a fountain appeared with two arms resembling two silver wings that ran in opposite directions: one flew like a torrent through the valleys of the north and the other softly descended by the slopes of the south.