The mysterious light of "la Dama" and the hidden treasure

La Gomera is a wonderful and mysterious island, with many legends and unusual facts of difficult explanation. One of these unusual facts are the so-called "wandering lights" or "popular lights" happened in different places of this island.

A spherical light that appears suddenly in the same geographic zone, of a blue-white color, orange or green and whose size oscillates between that would have the flame of a pure cigar lighted in the dark and the one of a soccer ball. Occasionally, on these lights it has been said that they have an apparently intelligent behavior, approaching the witness or following him. The observation in some cases is accompanied by a small hum.

The popular stories about the wandering lights are very old and in many cases they refer us to legends that have been told from time immemorial, where these luminaries are identified with ghosts, souls in pity or witchcraft witchcraft. 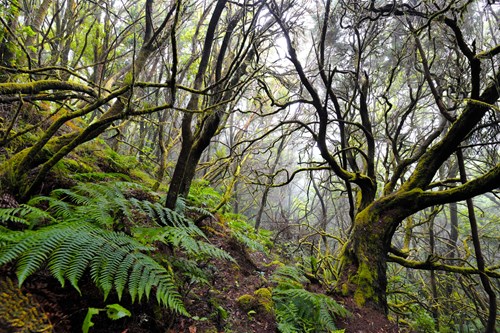 One of these legends tells the appearance of a mysterious light, in the southwest of La Gomera, in a place called Vega Abajo, between Chipude and the village of "la Dama".

It is said that many years ago three pirates arrived with a treasure to the beach of the Rajita, (in the locality of "la Dama", Vallehermoso). Two of them, went up to Vega Abajo to bury him and the other stayed on the beach with the boat. Once buried the treasure, one of the pirates killed the other to be less to deal. When the survivor arrived at the beach, he told the one who had been guarding the boat, that his companion had been lost and that they had to wait a little to see if he arrived. But the one who had stayed on the beach, suspecting the worst, got into a great fight with the murderer, who finally killed him. Then, without worrying about where the treasure was buried, it was lost in the immensity of the Atlantic Ocean.

Since then, according to popular tradition, a light appears every so often in Vega Abajo, where the first of the pirates was killed. His soul in grief, wanders through these places until, according to the elders of the place, three people find the treasure and one of them dies in the place where I say treasure.

This phenomenon, which according to the neighbors of the area, was seen by hundreds of people during the year, some time ago that is not seen, some attribute its disappearance to the construction of the hermitage of San Gregorio, but of course no one knows surely if it could reappear in the future.

If you are in La Gomera, you can visit the places that, according to legend, the pirates visited: La Rajita beach, which is a secluded, unspoiled beach with sand and caldrons embedded at the end of a ravine. The Lady's hamlet, located on a hill between the ravines of Erque and Iguala, a place highlighted by its sunny days and a warm and mild climate that has allowed the development of important crops of banana trees and tropical fruits such as avocado and mango And of course the Vega Abajo ... where you might get lucky and find the treasure!