Syagrus romanzoffiana, the queen palm or cocos palm, is a palm native to South America, from Paraguay and northern Argentina north to eastern Brazil and west to eastern Bolivia. It had been classified within the Cocos genus as Cocos plumosa, was assigned to Arecastrum, then moved to Syagrus. As a result of the nomenclature confusion, they often retain a previous name in popular usage. It is a medium-sized palm, quickly reaching maturity at a height of up to 15 m (49 ft) tall, with pinnate leaves.

The palm has a wide introduced range due to its popularity as an ornamental garden tree.

Named after Nikolay Rumyantsev (1754–1826), who was Russia's Foreign Minister and Imperial Chancellor and notable patron of the Russian voyages of exploration. He sponsored the first Russian circumnavigation of the globe.

The queen palm is found in most tropical and subtropical areas. It is very popular as an ornamental tree and much used in urban landscaping. However, the fronds die early and must be pruned to keep the tree visually pleasing. Its leaves and inflorescences are used as cattle fodder, especially for milking cows. Its fruits are edible, being sought by birds, as well as by mammals, including some wild canids, such as the pampas fox and the crab-eating fox. The fruits consist of a hard nut surrounded with a thin layer of fibrous flesh that is orange and sticky when ripe. The flavor is sweet and could be described as a mixture of plum and banana. 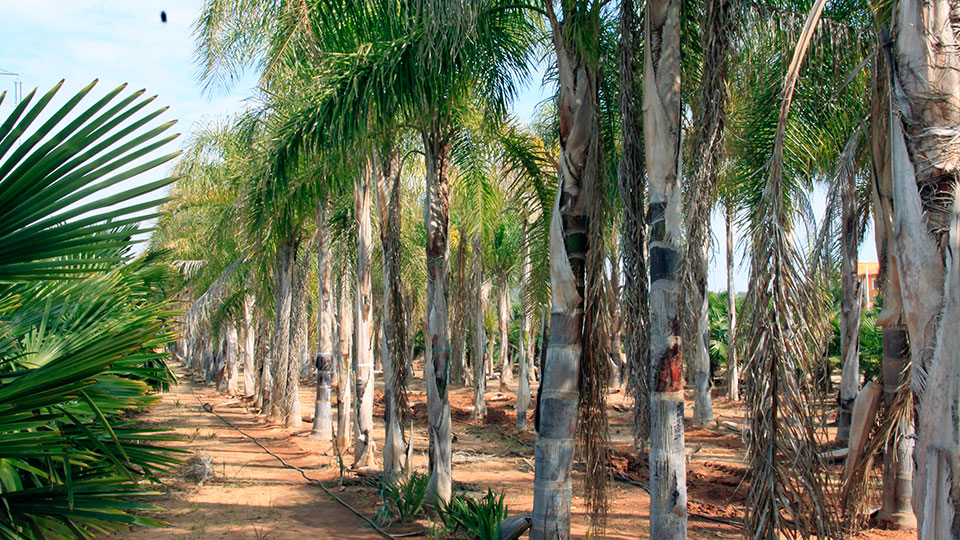