The common screwpine (Pandanus utilis) is, despite its name, a monocot and not a pine. It is native to Madagascar, Mauritius, and the Seychelles.

The trunk features aerial prop roots. The leaves are linear and spiny, with a spiral arrangement on the tree. The leaves are also dried out and rolled, and used to make mats in Kerala, India; and Hawaii. Care must be taken when handling the leaves because of their sharp spines.

The fruit of Pandanus utilis is edible, although not flavorful to humans and must be cooked prior to consumption.It attracts mammals such as, in North America, squirrels.

Within the family Pandanaceae, the genus Pandanus is thought to compose the largest group of plants. It is estimated that there are somewhere between 500 to 1,000 species within this genus. Pandanus utilis (pan-DAY-nus YOO-tih-liss), otherwise known as the common screwpine, is one such plant within this family. The origin of P. utilis has traditionally been thought to be Madagascar, but more recently the Mascarene Islands have been suggested as a possible place of origin.[ A long history of cultivation and transport to many parts of the world makes the origin difficult to trace. However, it is known to be grown in Senegal, Benin, Tanzania, Madagascar, Réunion and Mauritius. P. utilis has been introduced to many tropical and subtropical regions, including Central America, the Caribbean, the United States (southern Florida, Puerto Rico), Brazil, India and Indonesia.

Pandanus utilis was discovered by French naturalist Jean Baptiste Bory de Saint-Vincent. Although they were given a common name of pine, they are monocots, more closely related to grasses, orchids and palms than to conifer trees such as pines. Their name is derived from the spiral arrangement of their leaves around the branches. 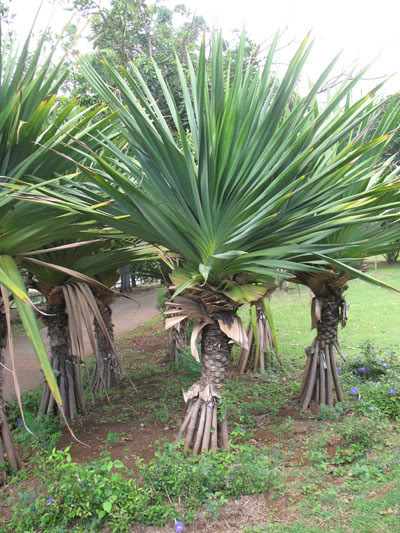