The olive, known by the botanical name Olea europaea, meaning "European olive", is a species of small tree in the family Oleaceae, found in the Mediterranean Basin from Portugal to the Levant, the Arabian Peninsula, and southern Asia as far east as China, as well as the Canary Islands, Mauritius and Réunion. The species is cultivated in many places and considered naturalized in all the countries of the Mediterranean coast, as well as in Argentina, Saudi Arabia, Java, Norfolk Island, California and Bermuda.

Olea europeana sylvestris is a subspecies that corresponds to a smaller tree bearing noticeably smaller fruits.

The olive's fruit, also called the olive, is of major agricultural importance in the Mediterranean region as the source of olive oil; it is one of the three core ingredients in Mediterranean cuisine. The tree and its fruit give their name to the plant family, which also includes species such as lilacs, jasmine, Forsythia and the true ash trees (Fraxinus). The word derives from Latin ŏlīva ("olive fruit", "olive tree"; "olive oil" is ŏlĕum)[4] a borrowing from the Greek ἐλαία (elaía, "olive fruit", "olive tree") and ἔλαιον (élaion, "olive oil") in the archaic form.

The olive tree, Olea europaea, is an evergreen tree or shrub native to the Mediterranean, Asia and Africa. It is short and squat, and rarely exceeds 8–15 m (26–49 ft) in height. The Pisciottana, a unique variety comprising 40,000 trees found only in the area around Pisciotta in the Campania region of southern Italy often exceeds this, with correspondingly large trunk diameters. The silvery green leaves are oblong, measuring 4–10 cm (1.6–3.9 in) long and 1–3 cm (0.39–1.18 in) wide. The trunk is typically gnarled and twisted.

The small white, feathery flowers, with ten-cleft calyx and corolla, two stamens and bifid stigma, are borne generally on the previous year's wood, in racemes springing from the axils of the leaves.

The fruit is a small drupe 1–2.5 cm (0.39–0.98 in) long, thinner-fleshed and smaller in wild plants than in orchard cultivars. Olives are harvested in the green to purple stage. Canned black olives have often been artificially blackened (see below on processing) and may contain the chemical ferrous gluconate to improve the appearance. Olea europaea contains a seed commonly referred to in American English as a pit or a rock, and in British English as a stone. 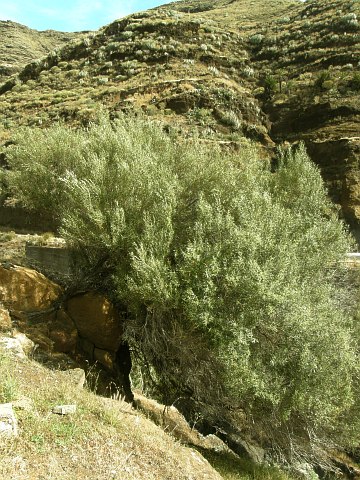