Pistacia atlantica is a species of pistachio tree known by the English common name Mt. Atlas mastic tree and as the Persian turpentine tree. In Iran it is called baneh.[4] In the Canary Islands it is known as Almacigo, and in Arabic, it is called بطم (buṭm or buṭum). In southern Iran, in Bandar-Abbas in Hormozgān Province it is called kasoudang and in Bushehr it is called kolkhong. In Turkey it is commonly known as melengic. In Kurdish the tree is called darwan or daraban, and the seed is called qazwan .

It is a tree of the genus Pistacia. It is a member of the same genus as pistachio, terebinth, and mastic. The Pistacia genus ranges from shrubs to trees adapted to drought and the Mediterranean climate.

It is stronger than Pistacia terebinthus, where it is used as rootstock in Ukraine and the United States for growing Pistacia vera, but resists frost better than P. terebinthus.

It is important to combat soil erosion. It strengthens the soil, and is used for reforestation of arid and steep slopes and against landslides. It is a typical urban street tree in the Black Sea cities.

The seeds, like pistachio, are edible oil seeds, like nuts, and contain up to 60% fat. Candy made with P. atlantica in Turkish are called tsukpi pistachio. Sometimes, the immature fruit is harvested and eaten with sour milk. The plant contains a resin, used as chewing gum in Kevan, Turkey, where it is called kevove rubber tree.

The resin is used to manufacture alcohol and lacquer. Its essential oils are used in perfume industry. The leaves are rich in tannins, up to 20% in the galls caused by an aphid parasite, used as the raw material for tanning in the leather industry. The sap is dried and used as incense, and its smoke releases a pleasant smell to the local environment for celebrations and religious ceremonies, as "incense".

Pistacia atlantica is a deciduous tree growing up to 7 m (23 ft) tall with branches spreading and growing erect to form a dense crown. The trunk is stout and covered in fissured bark. Old trees may have trunks measuring 2 m (6 ft 7 in) in diameter; it may take 200 years for a tree to reach 1 m (3 ft 3 in) wide.[4] The leaves are pinnate, each with seven to 9 lance-shaped leaflets.

The tree is dioecious with male and female trees producing different types of flowers. Both types are small and greenish and fall away quickly. Monoecious and hermaphrodite trees have been seen, but are unusual.[7] The oblong, fleshy, oily fruit borne by the female tree is 6 to 8 mm (0.24 to 0.31 in) long and pink in color, ripening to blue. It grows slowly becoming 1000 years old. It has broken bark with ashen gray color. Older branches have the same design, fractured and ash color, which gives the tree a grizzled look. The leaves are oval, almost sessile, shining above, and dark green, with seven to 9 leaflets, imparipinnate with petioles a little winged, flowers in racemes lax, the male and female on different trees. The flowers are unisexual, small, discreet green, thick as pea fruit, then changing to reddish blue. In colder areas the leaves in May check and fall in November. Though dioecious, in some communities males dominate the female specimens in number. It grows in oak woodlands and oak sclerophyllus. The fruits ripen from July to October, starting to bear fruit at the age of eight to 10 years, with abundant fruit after two to three years. 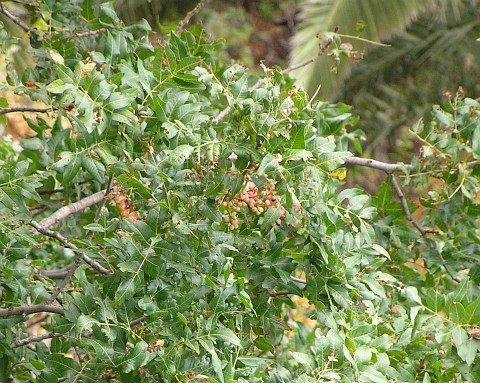