Curiosities and rituals of Aboriginal world in La Gomera

Traveling is one of the most enriching experiences that exist because when we visited other places, we meet other cultures and traditions, other ways of seeing life and feel.
La Gomera, not only offers beautiful scenery and a pleasant climate ... after this beautiful showcase an Aboriginal culture that can meet during your stay in our island hides.

Aboriginals, commonly known as guanches (although strictly this name belongs to the ancient inhabitants of Tenerife), were a religious people who worshiped the stars and the elements. They worshiped the sun, moon, rain, sea ... 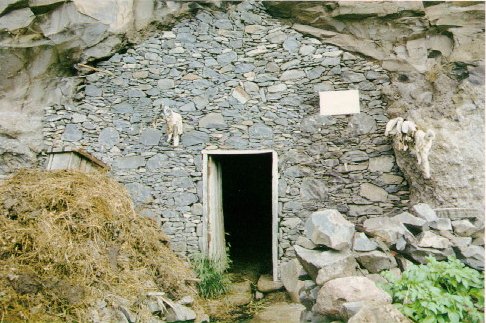 The ancient gomeros, believed that after death, the spirits of their ancestors were to stop the sun, astro they considered to be superior par excellence (along with the sky god that sustains) and was therefore an object of worship.
Their religion was polytheistic and animistic, and was set at three levels: at the top was the Supreme God, in the intermediate tutelary spirits of the clans and lower demonic beings, enemies of man.
In La Gomera cult was, among others, a creator god called Orahan and an evil god known as Hirguan, a kind of demon half goat half man who is also credited with one aspect of dog thick hair, bipedal.
Aboriginal, connected with their gods by priests or shamans. The priesthood, was believed to be hereditary, priests passed on their knowledge to family members, from grandparents to grandchildren or uncles to nephews.
Due to the nature of their animist religion, sacralized preferably roques or high places like mountains and made their worship outdoors under sacred trees like pine or dragon tree, in caves .... In the Alto del Garajonay, today we can still see a stone circle, an area where ancient sacrificial gomeros presented offerings to the gods. Similarly, on top of the small plateau called The Fortress of Chipude, archaeologists have located dozens of areas where islanders sacrifice ofrendando continued until the end of S. XVIII and we can currently visit.

One of the most important rituals were the rain request normally held in a high place, with a possible orientation towards the trade winds - the wind that brings rain. He shut himself livestock and left him without food. When hunger began to bleat these pressed insistently. Then people joined him, clapping and screaming. Sometimes, the ceremony continued with a procession to the sea, whose waters are beaten with branches.

These are some of the stories that are part of the ancient culture of this magical island called La Gomera, if you want to find out more on this exciting topic we invite you to visit us, because this is just an appetizer ... you still have many things to discover !