The Cave of Guahedum: a story of love and war

The "Cave of Guahedum", also known as “Cueva del Conde” or “Cueva de Iballa", is located southeast of place known as Degollada of Peraza, in the municipality of San Sebastián, it is a prehistoric cave that will forever be associated with the called "Rebellion of the Gomeros" in 1488.

And here took place one of the most important episodes of the conquest of La Gomera by the Kingdom of Castile is a story of love-that has as its backdrop the cave in which the heroic resistance of a people intermingles and a passionate love between the Lord of the Island of La Gomera a Castilian called "Hernán Peraza" and the young princess slingshot "Iballa".

Hernán Peraza "the young" -to distinguish him from his grandfather Hernán Peraza "old", the builder of the Torre del Conde San Sebastian, received in 1477 the government of the island of La Gomera hands of their parents Ines Peraza of Ayala and Diego Garcia de Herrera, Castilian lords of the smaller Canary Islands.

The young Peraza, arrived in La Gomera and ruled as a ruthless dictator, sowing discontent among his vassals and garnering a large number of enemies. 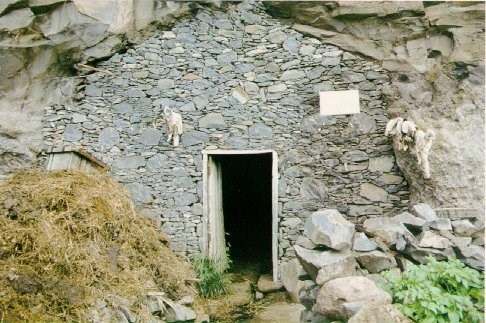 On the other hand, belonged to the aboriginal Ipalán camp, one of four on the island of La Gomera was divided, Iballa was of noble social class and lived in the Cave of Guahedum.

Young beauty was such that Hernán Peraza fell in love with her and they became lovers. However, based on precisely called 'pact Guahedum´who had been signed by his grandfather Hernán Peraza ”The Old" with the cantonal heads of the island, both peoples, gomero and Castilian, they had become" brothers ".

Peraza, breached the covenant, not only enthrall mistreating slaves and gomeros, but also maintaining relations with Iballa a slingshot princess, something completely forbidden by the pact.

This romance acted as a trigger for the rebellion, a council formed by three of the four Aboriginal chiefs gomeros, meets and decide to turn to Hernán Peraza to judge.

The warrior Hautacuperche, Iballa´s cousin and candidate to be her husband, was in charge of carrying out the arrest. But, moved by a strong personal interest, rather than capture, kills the November 20, 1488 through it with a spear, in the cave of Guahedum, where Peraza visiting Iballa.

Then the gomeros tried to conquer unsuccessfully the “Torre del Conde” in San Sebastián de La Gomera. Hautacuperche died in one of the attempts, demoralizing the rebels who left the site La Torre returning to the caves of the island.

Beatriz de Bobadilla, widow of Peraza, asked for help to the governor of Gran Canaria Pedro de Vera. When it comes it manages to capture a large number of gomeros through deception, promising forgiveness to all who from attending a religious ceremony for the deceased Hernán Pedaza. Then they brutally would be executed all males over 15 years, and their wives and children sold as slaves.

This bloody intervention of Vera in La Gomera is considered by historians as the effective and definitive conquest of the island of La Gomera for Castile.