The legend of San Borondon’s Island

In times of the Middle Ages before the mapping exclusively captured scientific data, the information provided by the maps was somewhat unique, since in their illustrations history, religion and mythology intermingled.

Thus in some atlases, between the Middle Ages and the Modern Age, one could find the exact location of the Garden of Eden, legendary cities, exotic plants, animals, wild, classical legends such as the Golden Fleece of Jason and the Argonauts, Of Hercules, sea monsters that the cartographers used to illustrate mysterious and unexplored regions, warning us of possible dangers if we navigated through these latitudes ... and of course, an endless number of islands that do not exist in the middle of the seas or even the rivers.

The mystery surrounding some of these islands has survived in the ancient scrolls as if they had patiently waited through the centuries for the arrival of a savvy traveler to finally get them out of hiding ... this is the case of the Island of San Borondón .

This wandering island, appears and disappears, for several centuries, in diverse points of the horizon of the Canary archipelago. Numerous witnesses have narrated the appearance of the same throughout the history and appears represented in an extensive cartography through the discurrir of the times like Hereford's Planisphere of Richard of Haldinghan (end of century XIII) German planisphere of Ebstorf ( Late thirteenth century) or the Letter of Pincian (1367).

Its existence came to receive such force that some European monarchs like the Portuguese Alfonso V and Manuel II, Kings Católicos and Carlos I of Spain, organized expeditions in his search.

San Borondón is the Canarian form of Saint Brendan or Saint Brandán de Confert, an Irish monk who is one of the most famous legends of Celtic culture According to one version of this account, this Irish monk of the sixth century crossed the Atlantic for seven Years accompanied by seventeen monks, looking for the Island of Happiness. 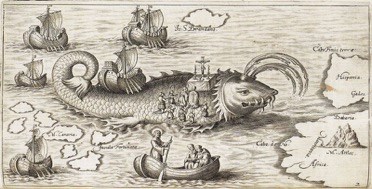 During his famous journey he traveled mythical lands populated by extraordinary beings, a world full of fantasies, monsters. One day they saw from the boat the silhouette of an island, and as the date of Easter approached they approached her to celebrate the prescriptive trades. When the next day, they were all ready to eat the meat they had cooked on the mainland, it began to tremble and began to move: it was a large fish on whose back the vegetation had developed giving it the appearance of an islet. Everyone jumped on the ship and watched as the supposed island quickly disappeared into the distance.

In the Canaries, the myth was adopted with enthusiasm, and adapted to the local idiosyncrasy since it is an indisputable fact that the appearance of an island appears before our islands with some regularity and in different places, whatever the explanation of this Curious phenomenon, optical or meteorological, the truth is that although it is not land ... sometimes you can see an island, possibly the Island of San Borondón, have you seen it?