Kleinia neriifolia also known as Verode or Berode and previously known as Senecio kleinia is one of flowering plant species of the genus Kleinia and in the daisy family (Asteraceae). It is native endemic to the Canary Islands and it used to be in the genus Senecio.

A succulent plant[1] Kleinia neriifolia has articulated branches (constrictions that make them look like rows of sausages)[2] and thick, stubby, elongated leaves which rest directly on the main stem or branch without a petiole or footstalk. Leaves growing clustered in crowded circles at the tops of the branches.[1] Trunk a meter high, and lanceolate leaves up to 12 centimetres (5 in) long.[2] Fragrant grey white flowers, blooms at any time between March and October. Deciduous, the leaves fall at the beginning of the dry season.[3] As with most arid habitat plants, reproduction is by reseeding only.

Berode grows abundantly in the Tabaibal-Cardonal zone or the arid, subtropical with steep and eroded substrates which are more pronounced and dominant in the eastern archipelago.[4] The vegetation can be compared with that of the arid areas of Sudan, Ethiopia, Arabia and Iran and is typical of the steppe in the African continent.[2]

Observations have been made about the relationships or communities that are formed between plants in such challenging conditions. In the case of the Canary Islands, the dominant Succulent tree (Euphorbia canariensis) with a supporting community of fellow halophiles: Verode (Senecio kleinia), Salt (Schizogyne sericea), Orijama (Cneorum pulverulentum), the Rubiaceae "Balo" (Plocama pendula) and also Tasaigo "typical" (Rubia fruticosa). It is indisputable that the tabaibales and cardonales are not climax (the highest point of anything conceived of as growing or developing or unfolding), but more like stadiums (a large structure for open-air sports or entertainments) or tesserae degradation of a former climax in harmony with its peculiar arid climate. For topographical position of cardonales, always in displaced situations, and the more open and typical serial or subserial of tabaibales, it seems close to the first climax potential. Species that are integrating communities also inclined to such subordination. 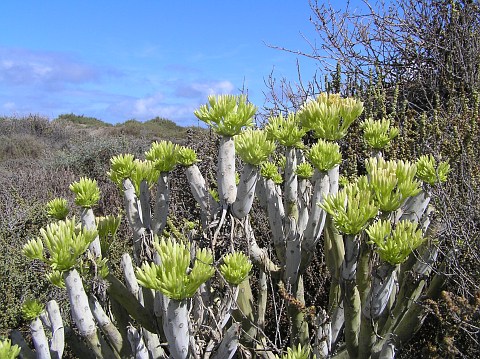