In 1492 Cristóbal Colon arrived in the bay of San Sebastián de la Gomera (considered the best of all the Canary Islands) after having left the Palos post in Huelva on 3 August. Its main objective was to find a new safer shipping route for trade with the West Indies.
For centuries, the natural port of San Sebastian was one of the best natural harbors in the world and was a coveted piece by the great powers on both sides of the Atlantic. It is therefore no accident that Columbus chose this enclave as the starting point of his "Journey of Discovery."
In La Gomera, the famous admiral found everything necessary to supply his ships, returning to the island two more times, in 1,493 and 1,498. On September 6, 1492, he left La Gomera and arrived on October 12 in the "new" American continent.
Since then, La Gomera is known as "the Columbus island" and today we can follow the footsteps of such an illustrious visitor through various places and monuments of the same.
We can begin our tour in the port of San Sebastián, the natural port where Columbus arrived more than five hundred years ago. A perfect port, a narrow entrance bay that allows anchoring a fleet, framed by the Punta de la Hila and the first risks of Garañones. Protected from currents of hangover and tides.
Then we can visit the small and charming Villa de San Sebastián with 9,000 inhabitants, retains the charm of typical Canarian colonial towns. Simple houses with two or four waters, patios dotted with flowers, balconies and wooden windows. 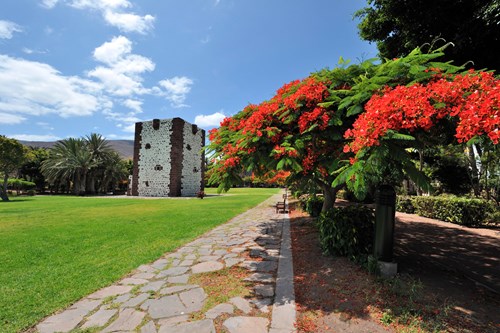 Its small size should not make us forget the historical importance of this place, walking its streets allows us to relive the times in which Christopher Columbus lived with its inhabitants. In the Royal Street, the main street of the city, we will find old colonial houses, castles, Gothic churches, interesting museums and shops with the best gummy sweets.
In the place of the Constitution, is the house of the Aguada or of the Customs. This was the first house of the gentlemen of the island. It is a simple house of the XV century, it has a beautiful canary patio, which was built around a water well. According to tradition, it was precisely from this well that the Admiral took the water he brought to America. Inside the enclosure is a small museum dedicated to the three scales of Christopher Columbus on the island and the role played by La Gomera in this event of universal importance.
Very close to the house of the Aguada, in the park of the Tower, stands the Torre del Conde, the oldest preserved military fortress in the Canaries. It was built around 1450 by the first Lord of the Gomera Hernán Peraza "el viejo". At first, it was built to protect the conquerors from the revolts of the native gomeros and later played an important defensive role of the city against the attacks of pirates and armed forces of the main foreign powers.
This building, an authentic relic from the end of the Middle Ages, was a refuge of the feudal Lady of the island Doña Beatriz de Bobadilla and Ossorio in 1488 after the uprising of the gomeros and ... as they tell the tongues their walls witnessed the amorous Of this one with Cristóbal Columbus. The tower houses an interesting sample of ancient cartography and is nowadays one of the most visited monuments of La Gomera.
On Calle Real 56, there is the so-called house of Columbus, a typical Canarian house where, according to tradition, the admiral stayed during his stays on the island. Today, Casa de Colón is a museum that houses a permanent exhibition of pre-Columbian art on the northern coast of Peru. In addition, the top floor of the Casa de Colón is used to house various temporary exhibitions.
The Church of the Assumption, on 32nd Street, is an authentic museum of sacred art. It is also known to have been the place where Christopher Columbus prayed before embarking on his trip to America. Columbus, would have prayed in the primitive hermitage of the XV century on which stands the present church. From this time dates the central nave of the current church. The building has a simple gothic style of clear Portuguese inspiration, which is mixed in harmony with the Mudejar ceilings and baroque style. This temple houses works of high artistic value from Flanders, Seville or America
Our tour can finish in the hermitage of San Sebastián that also dates from Century XV, is the first temple of religious character built in the town and dedicated to the martyr San Sebastián that was declared patron of the municipality. The hermitage is currently guarding the image of the city's patron and is one of the most significant examples of the first churches and hermitages in the Canaries.