Jewels of our Botanical Garden (I): Strelitzia Reginae, Queen of South Africa

Strelitzia Reginae, is also known as "Bird of Paradise" or the "Flower Bird" by the way the flower resembles a bird, is a plant native to South Africa, where it is popularly known as Ikhamanga.
The scientific term "Stretlitzia reginae" is dedicated to the wife of King George III of England, Queen Charlotte of Mecklenburg-Stretlitz who died in 1818, being a big fan of botany.

Among other curiosities to commemorate the first democratic elections in South Africa in 1994, the Kirstenbosch National Botanical Garden unveiled a variety of Strelitzia yellow and blue under the name "Golden Kirstembosch" petals? In 1996 this variety was renamed "Mandelas's Gold" in honor of Nelson Mandela. 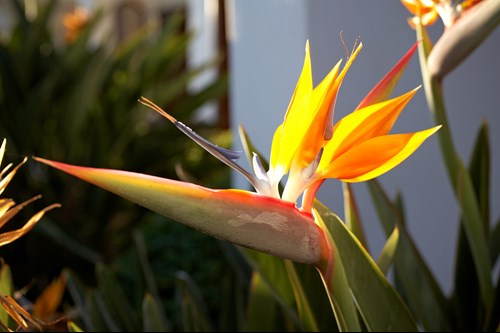 The importance of this plant in South Africa is such that even awards that bear its name are granted: the Order of Ikhamanga (Strelitzia), is an honorary award instituted in 2003 that is given to South African citizens featured in several areas. Ikhamanga flower (Strelitzia) symbolizes, with its unique and colorful beauty, the achievements of these men and women prominent South Africans in the field of art, creativity, culture, music, journalism and sport. Strelitzia, also figures prominently in the coat of arms of Kwazulu-Natal (Zululand) place and symbolizes the beauty of this South African province.
In Kwazulu-Natal, you can also find the species "Strelitzia Nicolai" popularly known as White Bird of Paradise, Paradise Giant or Giant Strelitzia ... as it can exceed 6 meters high. Its name comes from Tsar Nicholas I of Russia. This giant plant, has become popular in South Africa but flourished for the first time in 1858 at the Imperial Botanical Garden in St. Petersburg.

Strelitzia is grown in warm and tropical climates, flowers several times a year, the temperature must be above 10 ° C, hence the Canary Islands in general and particularly La Gomera offers ideal conditions for their development. Each flower stem flowers holds between 5 and 8 large orange-yellow petals and three petals deep blue.
You need intense light, three or four hours of direct sunlight, blooming with inadequate light. They are very resistant to the wind so they are well suited for coastal gardens.

Its flower is one of the most widely used in performing centers flores. This plant does not require much maintenance and watering is moderate.

You can find in the gardens of our hotel, usually at its best, do we take a walk through the botanical garden?