Jacaranda is a genus of 49 species of flowering plants in the family Bignoniaceae, native to tropical and subtropical regions of Central America, South America, Cuba, Hispaniola, Jamaica and the Bahamas.

It has been planted widely in Asia, especially in Nepal. Jacaranda mimosifolia is quite common in Zambia, South Africa, Zimbabwe and Australia, and has been introduced to most tropical and subtropical regions to the extent that it has entered the popular culture.

The generic name is also used as the common name.

The name is believed to be of Guarani origin, meaning fragrant. The word jacaranda was described in A supplement to Mr. Chambers's Cyclopædia, 1st ed., (1753) as "a name given by some authors to the tree the wood of which is the log-wood, used in dyeing and in medicine" and as being of Tupi-Guarani origin, by way of Portuguese.

The species are shrubs to large trees ranging in size from 20 to 30 m (66 to 98 ft) tall. The leaves are bipinnate in most species, pinnate or simple in a few species. The flowers are produced in conspicuous large panicles, each flower with a five-lobed blue to purple-blue corolla; a few species have white flowers. The fruit is an oblong to oval flattened capsule containing numerous slender seeds. The genus differs from other genera in the Bignoniaceae in having a staminode that is longer than the stamens, tricolpate pollen, and a chromosome number of 18. This genus thrives in full sun and sandy soils, which explains their abundance in warmer climates. Mature plants can survive in colder climates down to −7 °C (19 °F), however, they may not bloom as profusely. Younger plants are more fragile and may not survive in colder climates when temperatures drop below freezing, so planting of younger trees in pots and moving them into a greenhouse for winter is recommended. 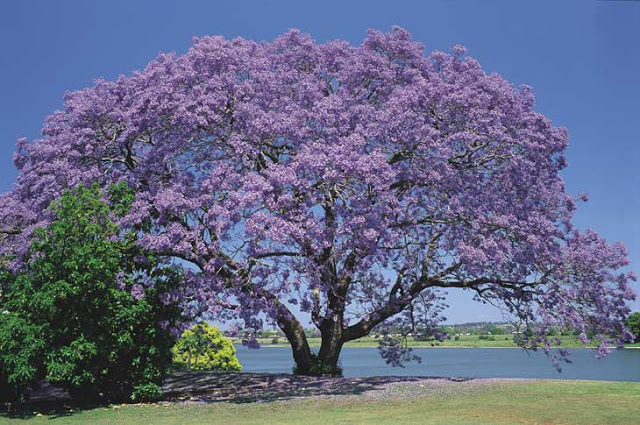