Spathodea is a monotypic genus in the flowering plant family Bignoniaceae. The single species it contains, Spathodea campanulata, is commonly known as the African tuliptree, fountain tree, pichkari or Nandi flame. The tree grows between 7–25 m (23–82 ft) tall and is native to tropical dry forests of Africa. It has been nominated as among 100 of the "World's Worst" invaders.

This tree is planted extensively as an ornamental tree throughout the tropics and is much appreciated for its very showy reddish-orange or crimson (rarely yellow), campanulate flowers. The generic name comes from the Ancient Greek words σπαθη (spathe) and οιδα (oida),[2] referring to the spathe-like calyx. It was discovered by Europeans in 1787 on the Gold Coast of Africa.

The flower bud is ampule-shaped and contains water. These buds are often used by children who play with its ability to squirt the water. The sap sometimes stains yellow on fingers and clothes. The open flowers are cup-shaped and hold rain and dew, making them attractive to many species of birds.

In Neotropical gardens and parks, their nectar is popular with many hummingbirds, such as the black-throated mango (Anthracothorax nigricollis), the black jacobin (Florisuga fusca), or the gilded hummingbird (Hylocharis chrysura).[5] The wood of the tree is soft and is used for nesting by many hole-building birds such as barbets. 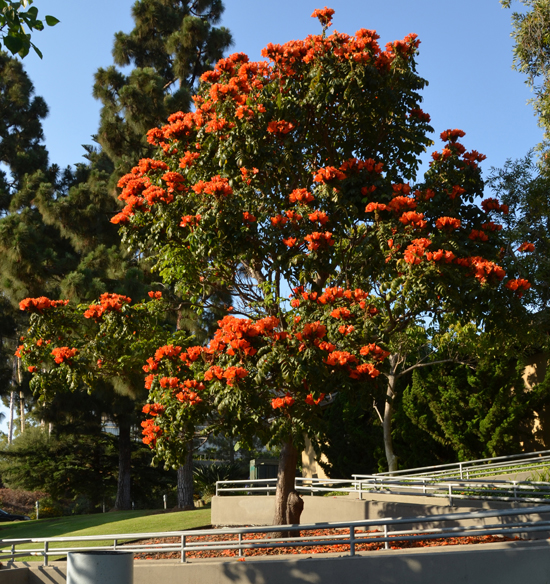