The genus Tamarix (tamarisk, salt cedar) is composed of about 50–60 species of flowering plants in the family Tamaricaceae, native to drier areas of Eurasia and Africa. The generic name originated in Latin and may refer to the Tamaris River in Hispania Tarraconensis (Spain).

They are evergreen or deciduous shrubs or trees growing to 1–18 m in height and forming dense thickets. The largest, Tamarix aphylla, is an evergreen tree that can grow to 18 m tall. They usually grow on saline soils, tolerating up to 15,000 ppm soluble salt and can also tolerate alkaline conditions.

Tamarisks are characterized by slender branches and grey-green foliage. The bark of young branches is smooth and reddish brown. As the plants age, the bark becomes bluish-purple, ridged and furrowed.

The leaves are scale-like, 1–2 mm long, and overlap each other along the stem. They are often encrusted with salt secretions.

The pink to white flowers appear in dense masses on 5–10 cm long spikes at branch tips from March to September, though some species (e.g. T. aphylla) tend to flower during the winter.

Tamarix can spread both vegetatively, by adventitious roots or submerged stems, and sexually, by seeds. Each flower can produce thousands of tiny (1 mm diameter) seeds that are contained in a small capsule usually adorned with a tuft of hair that aids in wind dispersal. Seeds can also be dispersed by water. Seedlings require extended periods of soil saturation for establishment. Tamarisk trees are most often propagated by cuttings.

Tamarix species are fire-adapted, and have long tap roots that allow them to intercept deep water tables and exploit natural water resources. They are able to limit competition from other plants by taking up salt from deep ground water, accumulating it in their foliage, and from there depositing it in the surface soil where it builds up concentrations temporarily detrimental to some plants. The salt is washed away during heavy rains.

Tamarix species are used as food plants by the larvae of some Lepidoptera species including Coleophora asthenella which feeds exclusively on T. africana. 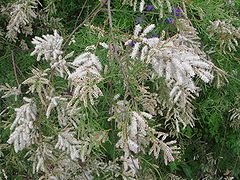