Nerium oleander  is an evergreen shrub or small tree in the dogbane family Apocynaceae, toxic in all its parts. It is the only species currently classified in the genus Nerium. It is most commonly known as oleander, from its superficial resemblance to the unrelated olive Olea. It is so widely cultivated that no precise region of origin has been identified, though southwest Asia has been suggested. The ancient city of Volubilis in Morocco may have taken its name from the Berber name oualilt for the flower. Oleander is one of the most poisonous commonly grown garden plants.

Oleander has historically been considered a poisonous plant because some of its compounds may exhibit toxicity, especially to animals, when consumed in large amounts. Among these compounds are oleandrin and oleandrigenin, known as cardiac glycosides, which are known to have a narrow therapeutic index and can be toxic when ingested.

In his book Enquiries into Plants of circa 300 BC, Theophrastus described (among plants that affect the mind) a shrub he called onotheras, which modern editors render oleander; "the root of onotheras [oleander] administered in wine", he alleges, "makes the temper gentler and more cheerful".

The plant has a leaf like that of the almond, but smaller, and the flower is red like a rose. The plant itself (which loves hilly country) forms a large bush; the root is red and large, and, if this is dried, it gives off a fragrance like wine.

In another mention, of "wild bay" (Daphne agria), Theophrastus appears to intend the same shrub.

Oleander was a very popular ornamental shrub in Roman peristyle gardens; it is one of the flora most frequently depicted on murals in Pompeii and elsewhere in Italy. These murals include the famous garden scene from the House of Livia at Prima Porta outside Rome, and those from the House of the Wedding of Alexander and the Marine Venus in Pompeii.

Willa Cather, in her book The Song of the Lark, mentions oleander in this passage:

This morning Thea saw to her delight that the two oleander trees, one white and one red, had been brought up from their winter quarters in the cellar. There is hardly a German family in the most arid parts of Utah, New Mexico, Arizona, but has its oleander trees. However loutish the American-born sons of the family may be, there was never one who refused to give his muscle to the back-breaking task of getting those tubbed trees down into the cellar in the fall and up into the sunlight in the spring. They may strive to avert the day, but they grapple with the tub at last.[

Oleander is the official flower of the city of Hiroshima, having been the first to bloom following the atomic bombing of the city in 1945.

It is the provincial flower of Sindh province. 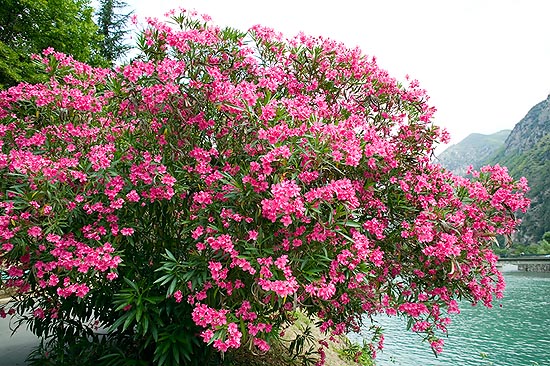