Flame of the forest

In West Bengal, it is associated with spring, especially through the poems and songs of Nobel Laureate Rabindranath Tagore, who likened its bright orange flame-like flower to fire. In Santiniketan, where Tagore lived, this flower has become an indispensable part of the celebration of spring. The plant has lent its name to the town of Palashi, famous for the historic Battle of Plassey fought there.

In the state of Jharkhand Palash is associated with the folk tradition. Many folk literary expressions describe palash as the forest fire. The beauty of dry deciduous forests of Jharkhand reach their height when most trees have fallen their leaves and Palash is in its full bloom. Palash is also the State Flower of Jharkhand.

It is said that the tree is a form of Agni, God of Fire. It was a punishment given to Him by Goddess Parvati for disturbing Her and Lord Shiva's privacy. In Telangana, these flowers are specially used in the worship of Lord Shiva on occasion of Shivratri. In Telugu, this tree is called Modugu chettu.

In Kerala, this is called 'plasu' and 'chamata'. Chamata is the vernacular version of Sanskrit word 'Samidha', small piece of wood that is used for 'agnihotra' or fire ritual. In most of the old namboodiri (Kerala Brahmin) houses, one can find this tree because this is widely used for their fire ritual.

In Theravada Buddhism, Butea monosperma is said to have used as the tree for achieved enlightenment, or Bodhi by second Lord Buddha called "Medhankara - මේධංකර". The plant is known as කෑල in Sinhala. 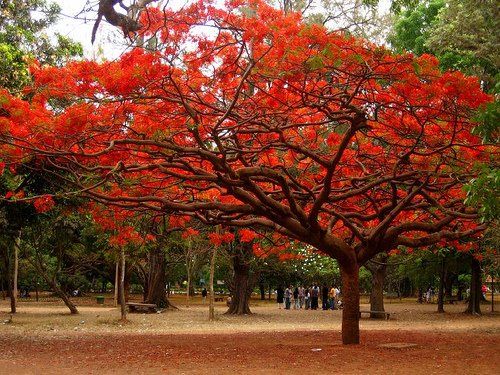