Strelitzia reginae is a monocotyledonous flowering plant indigenous to South Africa (the Cape Provinces and KwaZulu-Natal). Common names include strelitzia, crane flower or bird of paradise, though these names are also collectively applied to other species in the genus Strelitzia. Its scientific name commemorates the British queen Charlotte of Mecklenburg-Strelitz. The species is native to South Africa but naturalized in Mexico, Belize, Bangladesh, Madeira Islands and Juan Fernández Islands off the coast of Chile.

The plant grows to 2 m (6.6 ft) tall, with large, strong leaves 25–70 cm (9.8–27.6 in) long and 10–30 cm (3.9–11.8 in) broad, produced on petioles up to 1 m (39 in) long. The leaves are evergreen and arranged in two ranks, making a fan-shaped crown. The flowers stand above the foliage at the tips of long stalks. The hard, beak-like sheath from which the flower emerges is termed the spathe. This is placed perpendicular to the stem, which gives it the appearance of a bird's head and beak; it makes a durable perch for holding the sunbirds which pollinate the flowers. The flowers, which emerge one at a time from the spathe, consist of three brilliant orange sepals and three purplish-blue or white petals. Two of the blue or white petals are joined together to form an arrow-like nectary. When the sunbirds sit to drink the nectar, the petals open to cover their feet in pollen.

Strelitzia reginae is very popular as an ornamental plant. It was first introduced to Europe in 1773, when it was grown at the Royal Botanic Gardens, Kew. Since then, it has been widely introduced around the world, including the Americas and Australia, growing well in any area that is sunny and warm. In the United States, Florida and California are the main areas of cultivation, due to their warm climate. It is a common ornamental plant in Southern California, and has been chosen as the Official Flower of the City of Los Angeles. It has gained the Royal Horticultural Society's Award of Garden Merit.[4]

It is propagated by division or from seeds, and is a low-maintenance plant that is easy to grow in the garden; it is fairly tolerant of soil conditions and needs little water once established. If cared for well, they will flower several times in a year. They will thrive in rich loamy soil, especially when they get plenty of water throughout the year. They do well in full sun to semi-shade and respond well to regular feeding with a controlled release fertiliser and compost. They are sensitive to cold and need to be sheltered from frost, as it can damage the flowers and leaves.

Strelitzia reginae is slow-growing and will not bloom until three to five years have passed since germination (though it can exceptionally flower at two years).[5] It flowers only when properly established and division of the plant may affect flowering patterns. The flowers are, however, quite long-lasting once they appear. Peak flowering is in the winter and early spring. There is a yellow-flowered cultivar of this plant known as Mandela's Gold. 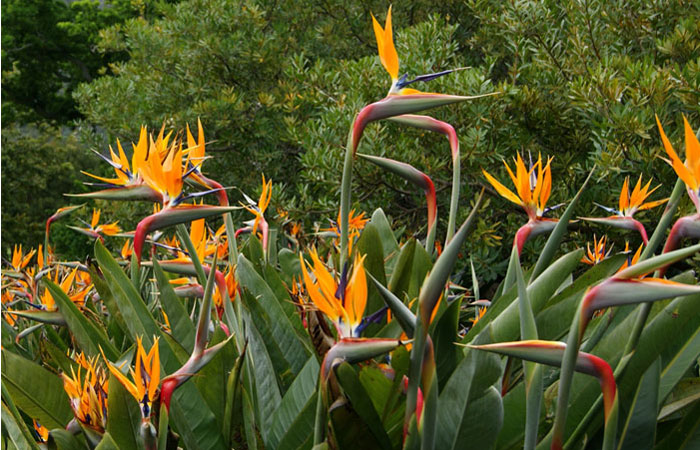