Brazilian peppertree is a sprawling shrub or small tree, with a shallow root system, reaching a height of 7–10 m. The branches can be upright, reclining, or nearly vine-like, all on the same plant. Its plastic morphology allows it to thrive in all kinds of ecosystems: from dunes to swamps, where it grows as a semiaquatic plant. The leaves are alternate, 10–22 cm long, pinnately compound with (3–) 5–15 leaflets; the leaflets are roughly oval (lanceolate to elliptical), 3–6 cm long and 2–3.5 cm broad, and have finely toothed margins, an acute to rounded apex and yellowish veins. The leaf rachis between the leaflets is usually (but not invariably) slightly winged. The plant is dioecious, with small white flowers borne profusely in axillary clusters. The fruit is a drupe 4–5 mm diameter, carried in dense clusters of hundreds.

The two varieties are:

Brazilian pepper is widely grown as an ornamental plant in frost-free regions of South America for its foliage and fruit. It is considered as a melliferous flower and is the main source of food for the bee Tetragonisca angustula, which is an important honey producer.

Although it is not a true pepper (Piper), its dried drupes are often sold as pink peppercorns, as are the fruits from the related species Schinus molle (Peruvian peppertree). The seeds can be used as a spice, adding a pepper-like taste to food. They are usually sold in a dry state and have a bright pink color. They are less often sold pickled in brine, where they have a dull, almost green hue.

In the United States, it has been introduced to California, Texas, Hawaii, Arizona, Nevada, Louisiana, and Florida. Planted originally as an ornamental outside of its native range, Brazilian pepper has become widespread and is considered an invasive species in many subtropical regions with moderate to high rainfall, including parts or all of Australia, the Bahamas, Bermuda, southern China, Cuba, Fiji, French Polynesia, Guam, Hawaii, Malta, the Marshall Islands, Mauritius, New Caledonia, New Zealand, Norfolk Island, Puerto Rico, Réunion, South Africa, and the United States. In drier areas, such as Israel and southern California, it is also grown, but has not generally proved invasive. In California, it is considered invasive in coastal regions by the California Invasive Plant Council (www.cal-ipc.org.)

Brazilian pepper is hard to control because it produces basal shoots if the trunk is cut. Trees also produce abundant seeds that are dispersed by birds and ants. This same hardiness makes the tree highly useful for reforestation in its native environment, but enables it to become invasive outside of its natural range. 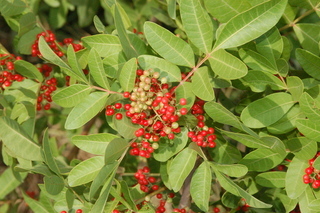