Ficus benjamina, commonly known as weeping fig, benjamin fig[2] or Ficus tree, and often sold in stores as just ficus, is a species of flowering plant in the family Moraceae, native to Asia and Australia.[3] It is the official tree of Bangkok. The species is also naturalized in the West Indies and in the States of Florida and Arizona in the United States.[4][5]

In tropical latitudes, the weeping fig makes a very large and stately tree for parks and other urban situations, such as wide roads. It is often cultivated for this purpose.

Ficus benjamina is a very popular houseplant in temperate areas, due to its elegant growth and tolerance of poor growing conditions; it does best in bright, sunny conditions but will also tolerate considerable shade. It requires a moderate amount of watering in summer, and only enough to keep it from drying out in the winter. It does not need to be misted. The plant is sensitive to cold and should be protected from strong drafts. When grown indoors, it can grow too large for its situation, and may need drastic pruning or replacing. Ficus benjamina has been shown to effectively remove gaseous formaldehyde from indoor air.[6]

The fruit is edible, but the plant is not usually grown for its fruit. The leaves are very sensitive to small changes in light. When it is turned around or re-located it reacts by dropping many of its leaves and replacing them with new leaves adapted to the new light intensity.

Used as decorative plant in gardens in Hyderabad, India

There are numerous cultivars available (e.g. 'Danielle', 'Naomi', 'Exotica', and 'Golden King'). Some cultivars include different patterns of colouration on the leaves, ranging from light green to dark green, and various forms of white variegation.

In cultivation in the UK, this plant[7] and the variegated cultivar 'Starlight'[8] have gained the Royal Horticultural Society's Award of Garden Merit.

The miniature cultivars, especially 'Too Little', are among the most popular plants for indoor bonsai. 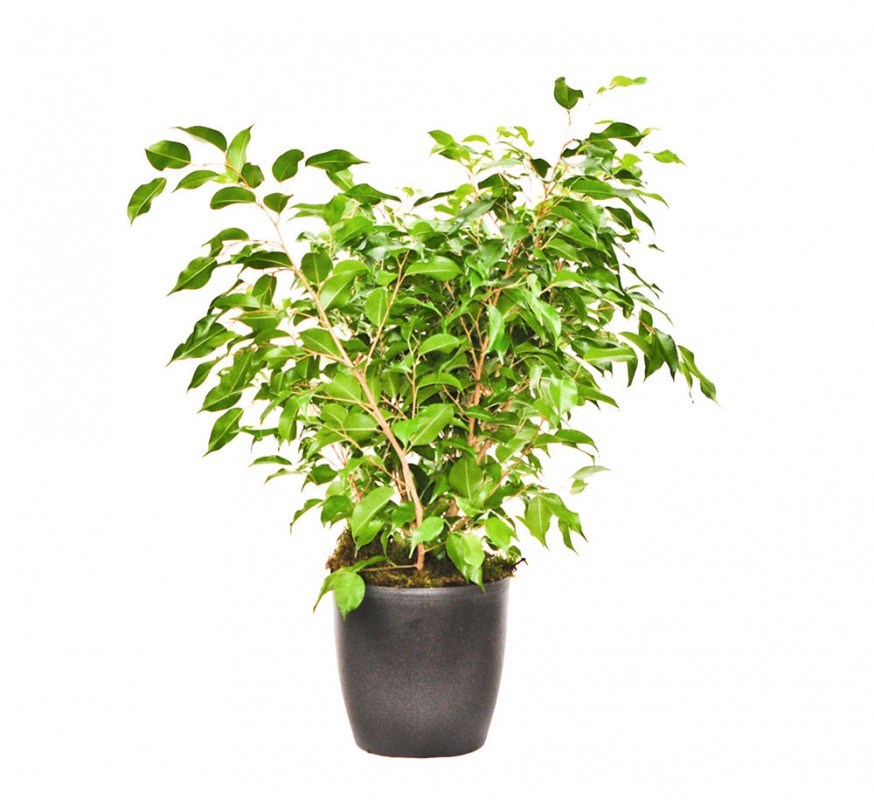