Cascabela thevetia (syn: Thevetia peruviana) is a poisonous plant native to central and southern Mexico and Central America, and cultivated widely as an ornamental. It is a relative of Nerium oleander, giving it a common name yellow oleander, and is also called lucky nut in the West Indies.

Cacabela thevetia is an evergreen tropical shrub or small tree. Its leaves are willow-like, linear-lanceolate, and glossy green in color. They are covered in waxy coating to reduce water loss (typical of oleanders). Its stem is green turning silver/gray as it ages.

Flowers bloom from summer to fall. The long funnel-shaped sometimes-fragrant yellow (less commonly apricot, sometimes white) flowers are in few-flowered terminal clusters. Its fruit is deep red-black in color encasing a large seed that bears some resemblance to a 'Chinese lucky nut.

Cascabela thevetia is cultivated as an ornamental plant, and planted as large flowering shrub or small ornamental tree standards in gardens and parks in temperate climates. In frost prone areas it is container plant, in the winter season brought inside a greenhouse or as a house plant. It tolerates most soils and is drought tolerant.[2]

The plant's toxins have tested in experiments for uses in biological pest control. T. peruviana seed oil was used to make a 'paint' with antifungal, antibacterial and anti-termite properties. 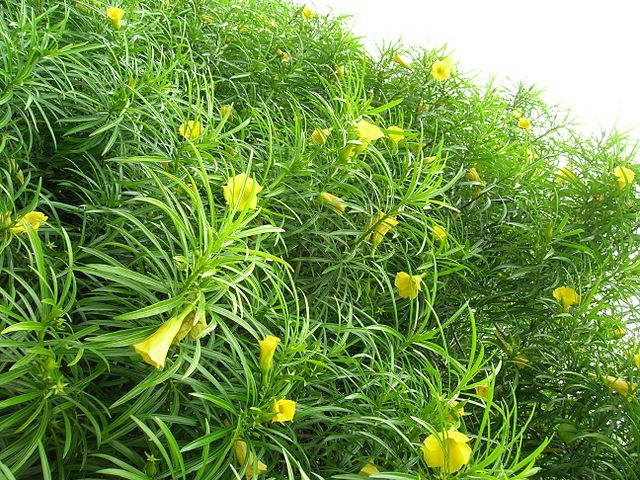