Araucaria heterophylla (synonym A. excelsa) is a member of the ancient and now disjointly distributed family Araucariaceae. As its vernacular name Norfolk Island pine implies, the tree is endemic to Norfolk Island, a small island in the Pacific Ocean between New Zealand and New Caledonia, about 1440 km east of Sydney, Australia. The genus Araucaria occurs across the South Pacific, especially concentrated in New Caledonia (about 700 km due north of Norfolk Island) where 13 closely related and similar-appearing species are found. It is sometimes called a star pine, triangle tree or living Christmas tree, due to its symmetrical shape as a sapling, although it is not a true pine.

The trees grow to a height of 50–65 m, with straight vertical trunks and symmetrical branches, even in the face of incessant onshore winds that can contort most other species.

The young leaves are awl-shaped, 1-1.5 cm long, about 1 mm thick at the base on young trees, and incurved, 5–10 mm long and variably 2–4 mm broad on older trees. The thickest, scale-like leaves on coning branches are in the upper crown. The cones are squat globose, 10–12 cm long and 12–14 cm diameter, and take about 18 months to mature. They disintegrate at maturity to release the nut-like edible seeds.

The scientific name heterophylla ("different leaves") derives from the variation in the leaves between young and adult plants.

The first European known to have sighted Norfolk Island was Captain James Cook. In 1774 on his second voyage to the South Pacific in HMS Resolution, Cook noted the presence of large forests of tall, straight trees that appeared to be suitable for use as masts and yards for sailing ships. However, when the island was occupied in 1788 by convicts transported from Britain, it was found that Norfolk Island pine trees were not resilient enough for these uses and the industry was abandoned.

In the late 1950s a trial shipment of Norfolk pine logs was sent to plywood manufacturers in Sydney, Australia, with hopes to develop a timber export industry on Norfolk Island. Although the plywood companies reported excellent results, the industry was deemed not sustainable by the Norfolk Island Advisory Council, who decided to reserve timber production for local use. The timber is good for woodturning and together with the similar Cook pine is extensively used by Hawaii artisans. 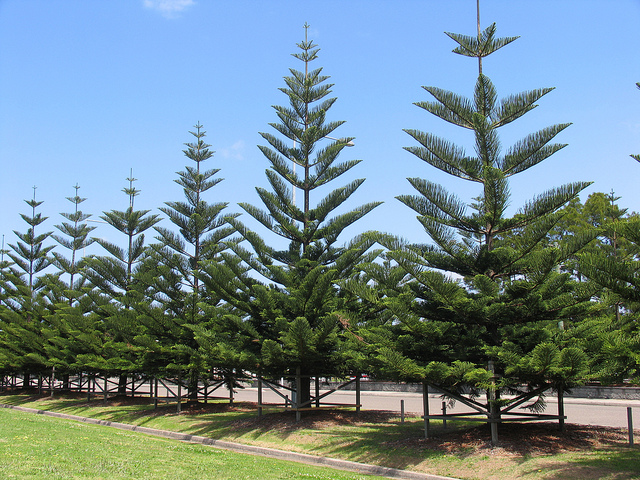