Erythrina crista-galli, often known as the cockspur coral tree, is a flowering tree in the family Fabaceae, native to Argentina, Uruguay, southern Brazil and Paraguay. It is widely planted as a street or garden tree in other countries, notably in California. It is known by several common names within South America: ceibo, seíbo (Spanish), corticeira (Portuguese) and the more ambiguous bucaré, to name a few. Its specific epithet crista-galli means "cock's comb" in Latin.

This species characteristically grows wild in gallery forest ecosystems along watercourses, as well as in swamps and wetlands. In urban settings, it is often planted in parks for its bright red flowers.

The root is a taproot with nodules produced by nitrogen-fixing bacteria. The bacteria live in symbiosis with the tree, facilitating the tree's absorption of nitrogen in return for organic substances which the bacteria need. The tree's trunk is woody with irregular, spiny branches. These branches form a layer without definite form[verification needed] and die after flowering.

The tree flowers in the summer, from October to April in their native South America and from April to October in the northern hemisphere. It Usually blooms from November to February The red flower, arranged in inflorescences of the raceme type, is pentameric, complete, and of bilateral symmetry. Its calyx is gamosepalous, like a little red thimble. The corolla, like that of other legumes like common beans, is butterfly-shaped; however, the largest petal, called the "standard", is arranged in the lower part. The two of the petals called "wings" are so small that they are practically hidden within the calyx. The remaining two petals partially fuse together on occasion and form the flower's keel or "carina"; this protects its reproductive organs. The androecium consists of ten stamens, one free and nine united by their filaments (gynostemial androecium). The unicarpel gynoecium is welded between the stamens like a knife in its sheath.

The flowers are rich in nectar and are visited by insects, which usually have to crawl underneath the carina and thus pollinate the flowers.

The tree's fruit is a legume, a dry pod a few centimeters in length derived from a single carpel and contains about 8-10 chestnut-brown bean-shaped seeds. The cotyledons are hypogeal, staying underground upon germination. 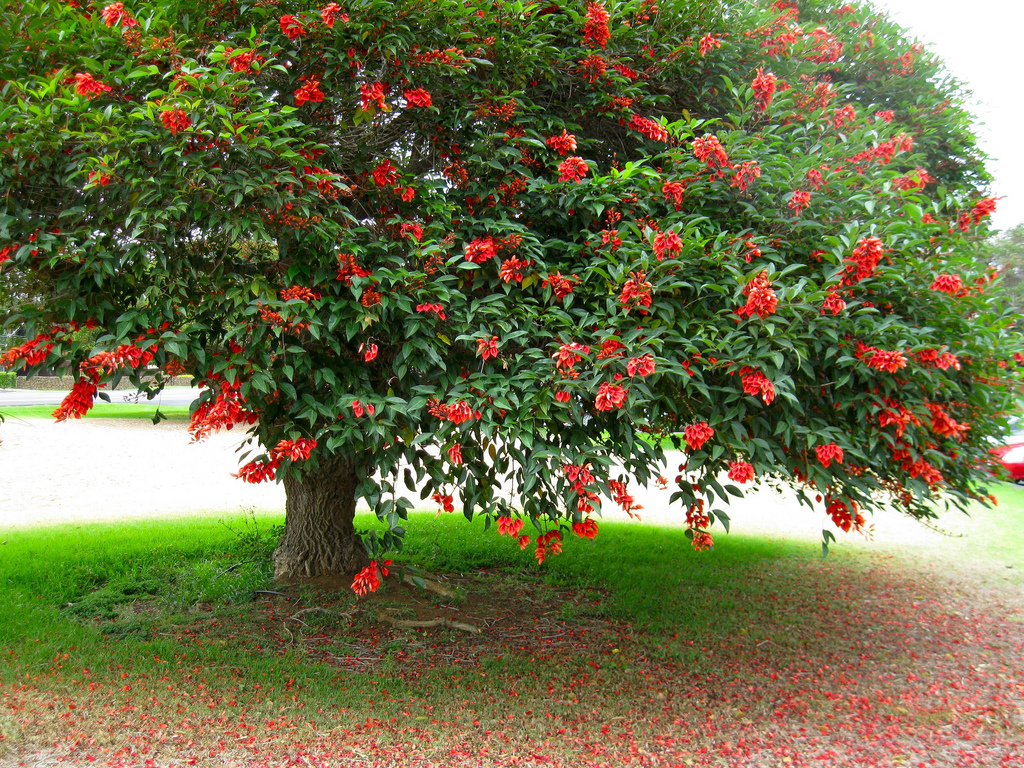