Abrante viewpoint, a balcony to the Atlantic Ocean

The Abrante Viewpoint built in 2014 and located in Agulo town, is one of the most well known viewpoints of La Gomera Island. If you are visiting La Gomera, or planning to travel to the island, this viewpoint is undoubtedly a must-visit on your list.

A platform, facing out to the Atlantic Ocean with ceilings, walls, and floors all in glass. The enjoyment of this modern platform is make you will feel suspended in mid-air over 600 meters above sea level.

The glass walkway is only for braves. It is an experience for the most daring and for those who are not afraid of heights.

You will feel butterflies in your stomach as soon as you step onto the glass platform, but once inside you will be delighted by the wonderful views that Abrante viewpoint offers.

Looking down you will find Agulo town and in front of you, a panoramic view of Tenerife Island and Mount Teide. A thoroughly enjoyable experience! 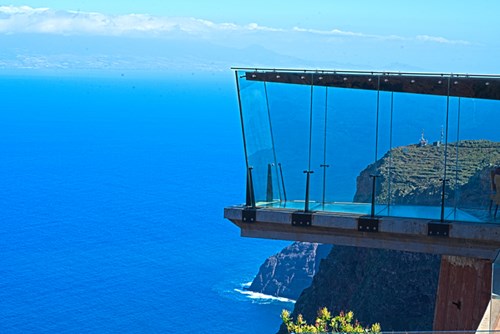 The viewpoint has a restaurant through which you can access the glass platform.

To get to the viewpoint, first you have to go to Centro de Visitantes Juego de Bolas at Garajonay National Park, once there a sign shows the access road to the restaurant and the viewpoint.

The outstanding views is not the only charm of Abrante viewpoint, like other places in La Gomera, the legend behind this place is also remarkable. Do you want to know more about it?

Abrante was a young girl who lived on the island of La Gomera and Zula was a handsome young man who was in love with her. However, Gazaña, Abrante’s mother, opposed to their union and prohibited both from seeing each other.

The anxiety to live a love story together caused the girl to flee from home, and to go after her beloved Zula. However, the destiny had prepared an unlucky end to both of them. When Abrante was climbing the cliff trying to escape, she ended up slipping and falling while Zula was looking at the heart-breaking scene.

The young man, under pain of death, decided to seek revenge. He got a potion from a witch of Chipude town and later, Gazaña drank it causing her a strong pain. The same pain her daughter suffered when falling down from the cliff.

Every afternoon, Gazaña screamed and yelled in pain, her screams could be heard from the distance, and it seemed that her pain increased at nightfall. But this was not enough revenge for Zula, the young man, who went back to talk to the witch. He asked her if he could have a new potion. However, the witch said that it was not possible to hurt her more, and the only way would be to make a sacrifice. Zula eager for revenge promised himself to do everything possible to achieve his goal.

The witch explained Zula that the sacrifice consisted of taking his own life. And as a result, a mountain will rise and keep Gazaña in darkness forever. She showed him the place where he had to make the sacrifice.

Zula accepted what the witch said, and took his own life in the place she mentioned. When the young man fell to the ground, immediately a huge mountain covered the town where the mother of Abrante was living.

Nowadays, the rocks of Zula and Abrante make up the amphitheatre at Agulo town.

Now that you know the legend behind these rocks, you cannot miss this stunning viewpoint that offers such outstanding views. It is a fairly pleasant experience!