Get to know the animals living at Eco Finca Tecina

It is an ecological garden based on permaculture design principles, which are centred on the patterns and features observed in the natural ecosystem.

We do not use any type of farm machinery to avoid damaging the soil; instead, we use organic matter and organic fertilizing materials, and by doing so the plants that live harmoniously together can grow under natural conditions, absorbing all the nutrients from the soil.

Eco Finca Tecina is not only important for us because of the plants or crops we grow, but also for the animals that live here in complete harmony with nature. These animals have come to Eco Finca Tecina from different places and each one of them has a peculiar story worthy of note.

Do you want to know the story behind each of them?

The first visitors from the animal kingdom arrived here in 2016; they made a nutrient-rich compost bed.

Then, a rooster and three black-Canarian hens arrived in our garden through a neighbour on the island. They were designated to the organic fraction of food waste from our kitchen.

As you may know, in organic farming the soil used is chemical-free and the plants take its nutrients through compost or animal manure, for this reason, is important to have animals around. We also recycle and compost green waste, known as biological waste, together with the organic fraction of food waste.

In May 2017, a litter of chicks was born, 2 males and 4 females, and the two males have now become the "bosses" of the henhouse.

During October of the same year, the nearby area was explored and three palmera sheep were recovered. A specie that is currently in danger of extinction. This breed of sheep in a wild environment may cause significant environmental damage.

At that moment and to our surprise, one of these three sheep was pregnant, and Eco, the first lamb from Eco Finca Tecina, was born in the same month. 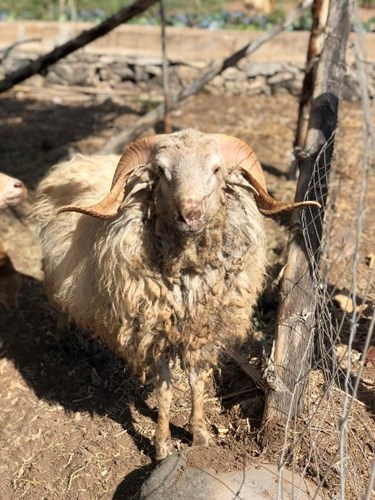 The next animal to arrive was Hugo, in April 2018.

A peaceful donkey that previously belonged to a family that could not maintain it due to a relocation plan. We decided to welcome Hugo who is now living in perfect harmony with the sheep.

Donkeys are by nature one of the friendliest and most affectionate animals of their type, they need to be surrounded by other animals, otherwise, they can become depressed or get sick. Hugo is living together with the sheep and he seems to be very happy and healthy. 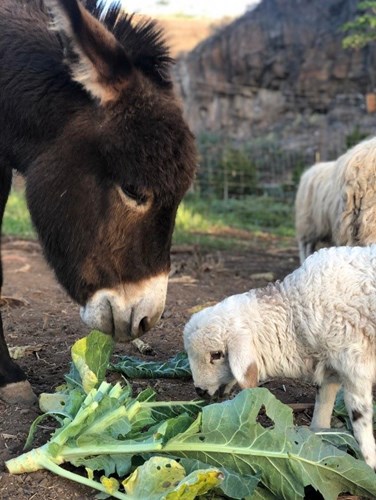 In May of the same year, Eco Finca Tecina acquired 50 chickens of Isa Brown breed. Thanks to them we keep developing the recycling chain. At that time, the henhouse was also enabled for a crop of alternative vegetables, dividing the manure into two differentiated zones, thus avoiding saturating the soil with nitrogen.

And while the cycle of life never stops; In November 2018, Eco became the father of two lambs, a male and a female.

The labour and delivery process was quite problematic and the mother rejected one of the sheep, Ben. At that time, Pedro, took care of the sheep and fed him with milk bottle for weeks, until the little animal could fend for himself.

Today, Ben walks happily around the farm and is very friendly with visitors.

In January of this year, 2019, Shawn, a sheep of mixed Canarian breed and his lamb Browni, joined our family. Both belonged to a person who found it very difficult to take care of them on his farm. 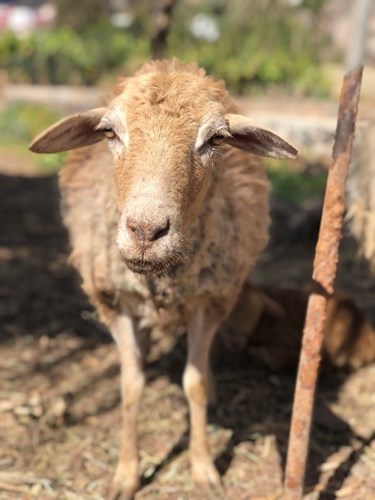 In the same month, Margarita and her four-month-old calf Ferdinanda arrived at Eco Finca Tecina. Margarita is a Friesian cow whereas Ferdinanda is a mixture of Friesian and Angus. 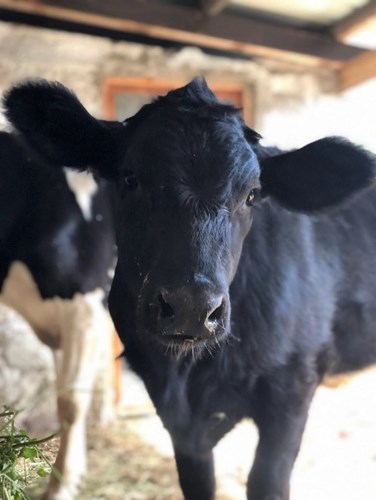 Both animals belonged to a livestock farm in La Gomera that for some reason it was going to close down and consequently all the cattle would go to the slaughterhouse.

The animal manure in organic production is of vital importance, which is why we finally decided to acquire them at Eco Finca Tecina.

Today, they live happily with the rest of the animals at Eco Finca Tecina.

If you want to visit Eco Finca Tecina, take our guided tour available every Tuesday from 10 to 13 hours. A pleasant walk in which we will show you how we take care of our plants and where the little ones can enjoy getting closer to all our animals.