Pirates and Corsairs in the Canary Islands

Canary was for several centuries one of the great stages of the world's piracy. The discovery of America and the import of their wealth, as well as conflicts between the major powers led to the overall rise of piracy on trade routes.

Canary became the target of numerous raids by pirates due to its strategic location on the route to the West Indies and in retaliation to weaken the Kingdom of Castile. American treasure-laden merchant vessels, disembark on the island ports desprotegidos- practically on their way to old Europe, making them easy prey.

There were two main ways of exercising piracy ... as a privateer/corsair or pirate. Both were engaged in looting merchant to thereby undermine the commercial monopoly imposed by Castilla ships. In the Canaries they acted pirates and privateers of all nationalities, but most were English, French, Berber and the Netherlands. The main difference between pirates and privateers, lay in the "legality" of their actions. 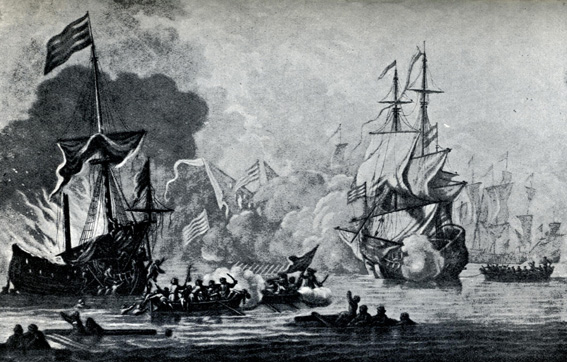 The privateer or corsair was a pirate but a nation authorized to carry out their robberies. In most cases, it was a particular sailor who offered his services and his boat to a monarch had to be-not necessarily of their own country and often in wartime. The monarch, in a document called Letter of Marque, granted him permission to attack maritime traffic and thus weaken enemy countries. Thus, the privateer, became part of the navy of the country. The actual patent, legalized their mission so that their participation in the war and could not be considered as a case of piracy, or as an act of private war.

This license, although it is generally conceded in wartime, also awarded in peacetime, to attack as retaliation, ships of another country with which he had not declared war but that there was some degree of traditional belligerence. The letter of marque, he gave the privateer, protection of the nation that gave and can use its ports freely and in principle, they could be hanged if captured by the enemy. They could return safely to the country's ports for which "worked", where they were welcomed and even honored, there sold their boots and were provided with food, drink and weapons for future actions.

In return for this protection, the privateer should accept the laws and customs of war, follow the instructions of their monarch and provide a deposit as a guarantee that would respect the established order. Privateers recovered their investment with the booty to plunder the captured ships and small cities, although part of that booty was handed over to the crown, so it was a good deal for both parties involved.

This was the method used in the Canary Islands, for various foreign nations, that part of the wealth extracted from America by the Spaniards, arrived at their hands. This covert war was wearing and hampering the Spanish expansion, having to monitor their own costs and protect their colonies.

The pirate, however, did not depend on anyone, he had not accountable to any authority, robbed on their own, at sea or in coastal areas. His behavior is not held to any ethical, its profit motive was guiding his steps. He acted indiscriminately against merchant ships of any nation. Alter regular trading, threatening the overall business security, so being chased by all maritime nations and especially by the great powers of the time. The crew were mercenaries, experts in handling weapons and in the melee. They used their numerical superiority and speed of their ships to seize cargo ships with limited crew and little experience with weapons. Unlike privateers, places where they could sell their booties ...they could be very dangerous, because they could be arrested and hanged in these ports ... it all depended on greed and moral authorities of the ports that arrived , something always difficult to figure out.

La Gomera was the subject of raids both pirates and privateers, castles and towers as the Torre del Conde are witnesses and protagonists of many stories of pirates in the Canaries.