Playa de Santiago, a village where is located the Hotel Jardín Tecina, is currently the most important area of the south of La Gomera by population, where the sun and pleasant temperatures all year usually reign.

In the early twentieth century settled in this area of ​​the coast-where could only be accessed by boat to 60- year the Norwegian company Fred Olsen and company tinerfeña Rodriguez Lopez, these two companies were engaged in agricultural export sector and the Lopez Rodriguez also the fishing industry through a cannery. Both became the Tecina estate in a huge and productive farm, and there are many workshops packing fruit, bananas and tomatoes exported to Europe from the small pier of Playa Santiago. Irrigated agriculture gained strength from charging channeling the waters of the upper area who carried out these two great companies, who also built a series of dams that could hold water of low rainfall. All this contributed to promote the development of the village of Playa de Santiago. 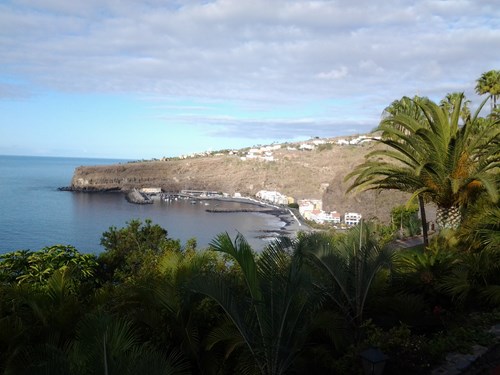 The fishing has been, for a long time for this region another important economic engine. In the early twentieth century, La Gomera was known in other islands by their fishing wealth and good economic prospects ... so when the November 18, 1909 saw the eruption of Chinyero volcano in Tenerife municipality of Santiago del Teide, their residents migrated to other parts of the island and south of La Gomera, where they decided to settle establishing the embryo of the small fishing village of Playa de Santiago.

Until the age of 70 la Gomera recorded an important industrial activity related to fishing, arriving to work at the same time as three canning factories.

The last cannery built in La Gomera was Santa Rosalia in Playa de Santiago, in 1931, which belonged to Rodriguez Lopez firm. In this factory, it was canned for the Canary market roe, mackerel with tomato, tuna, frigate tuna, bonito and sardines. Also they produced fishmeal. When there was no tuna around, the fleet fishing: brown, old, Brotas, bream, sea bream and other fish not intended for canning which were sent to Tenerife for marketing in the arcades.

The wives and daughters of fishermen who sought fish for the factory worked in the preparation of canned (peeling and packing the fish).

In the hard times of the Civil War and its aftermath, many gomeros were able to succeed thanks to fish, canning, and the production and export of bananas and tomatoes.

The fish came to be used as currency, the fishermen took to the villages to exchange for other products and foods: potatoes, corn, eggs, chickens and so on. And in that time, the current money, paper money was not commonly used. The money for payrolls staff came by boat and not always arrived punctually. Playa Santiago vouchers twenty five and fifty cents, which had the same value and used that money to buy, pay, change were printed. The distributing company, waiting for genuine banknotes.

Electricity, arrived in Playa de Santiago before the rest of the island thanks to generators running from 19:00 to 12:00, when the fluid is going to interrupt the sirens warned an hour before cutting. It also had, in Santiago, with a hospital, a cinema and even a small airport for small planes, with about five hundred meters of track, which just uphill for devices that could be stopped landing at quickly on landing.