The legend of the shepherd and the Laguna Grande

The history of La Gomera could be told through stories and legends... an oral tradition that allowed the events set in memory of a different nature.
La Gomera is an island full of surprises, where stories of witches and witches, strange lights and appearances... are part of the popular tradition.
In the eighteenth century, there were still communities in La Gomera, who had just come into contact with the "European" and continued to practice ancestral rites in many clearings, considered sacred places. The practice of these rituals, led to the Christian religion rebaptized many sacred places of ancient "gomeros" as "bailaderos" (places where witches gather to perform their rituals). One of these places, Laguna Grande, is located in a forest clearing Garajonay National Park, a mysterious at nightfall recreational area ... and day. A plain, where according to the stories, witches gathered around a circle of 15 stones to perform rituals and incantations. 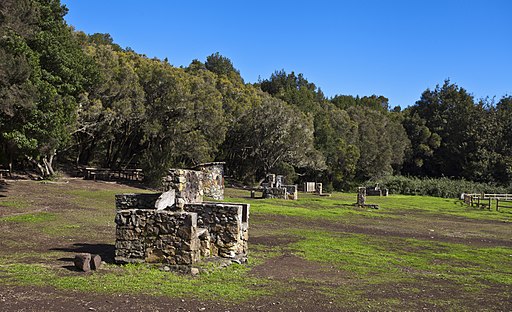 One of those stories, that a shepherd seeking green grass for their cattle, was too entertained and darkness surprised him in the Laguna Grande. Although it was a full moon night, he decided not to return home by the dangerous path that led to it.
Weariness made quickly asleep with a heather, however awoke at midnight. The moonlight flooded forest clearing and laughter everywhere, whispering ... of the dense forest left dozens of women who went to the center of the clearing was heard. These women with hair loose and disheveled, began to call the devil, dancing barefoot to the beat of a drum and chácaras, while undressing.

Witches approached the beast that spoke to them and they laughed. They had passed several hours again when the moon was obscured by cloud, the forest darkened and the pastor after looking at the sky turned his gaze to the center of the clearing ... that was deserted now. At first light the pastor stood to go home thinking that everything that happened was a bad dream, but a few steps from where he had fallen asleep and half way the body was found dead of an owl ...

If you're hiking in the Garajonay National Park, take care to return before nightfall in the Laguna Grande...