Gofio, a canarian jewel for your health

Gofio is a flagship product within the Canarian diet that has survived the passage of time. No canary home where you have not had breakfast once with a cup of hot milk with gofio and sugar or ... a canary that has not tasted, for example, a good escaldón or lump of gofio.

Gofio is a flour of toasted cereals, grains traditionally roasted and ground, stone, adding a pinch of salt and has since February 2014 with a protected designation of origin, recognized by the European Commission.

La Gomera this 2016, has won several prizes awarded by the Canarian Institute of Food Quality at the best Canarian gofio productions.

It is a pre-Hispanic food, of Berber origin, they consumed aboriginals as a fundamental part of their diet. The ancient canaries, elaborated different types of gofio, using fern rhizomes, barley, lentils and wheat. Then they were incorporating new ingredients, as in the case of millo from America and rye. The Guanches used to toast the gofio in clay jars and then ground it in hand mills porous basalt stone. 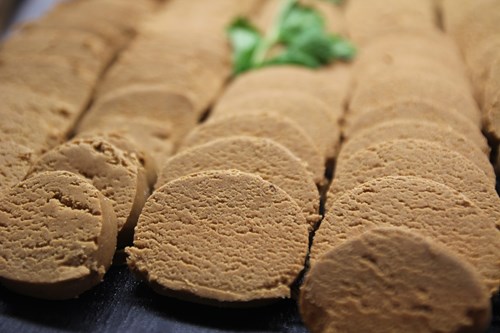 Its high nutritional value, it became the staple food to alleviate famine times, suffered in the islands, especially during and after the civil war. Today, it is consumed in all social strata of the Canary Islands.

Currently, there are various types of gofio that can be found in the market, being the most used raw materials millo and wheat, followed by barley and some legumes like chickpea.

Gofio mainly made of millo, is the most consumed, being used for milk, soups, purees or mixed with water or other broths and supplemented with products such as almonds, blanched or as an ingredient for desserts. Gofio wheat is consumed more in than in the eastern and western islands. Its color is lighter than the Millo and its texture is finer so it is preferred for breakfast milk.

Gofio is a natural food, whose production only natural techniques are used (it is common, for example, processing with the stone of a moulin). No preservatives or colorings.

It is very rich in vitamins (especially B vitamins, such as B1, B2 and B2, plus vitamin C, A and D) and minerals (such as iron, calcium, magnesium, potassium, sodium and zinc). It also provides omega-6 fatty acids and amino acids polyunsaturated. Yes, because they are high in sodium and potassium is not appropriate in patients with kidney problems. It also provides interesting amounts of dietary fiber and protein. Gofio, by both, it can help you maintain a balanced diet and keep your body healthy.

Gofio is an extremely rich whole food dietary fiber, so it becomes an ideal natural choice when regular intestinal transit, and maintain and improve intestinal health itself. It is appropriate, therefore, in the treatment of constipation or how to prevent naturally.

Its fiber content is also very interesting for controlling cholesterol and triglycerides.

It is a very suitable food for people with diabetes, because it delays the absorption of simple carbohydrates. That is to say, is a natural product that helps regulate the different levels of blood glucose after having ingested.

For its richness in omega 6 gofio becomes an ideal place for those wishing to reduce high cholesterol levels, because it helps to reduce and eliminate the presence of accumulated fat in the arteries food.

It is a suitable food in a varied and balanced diet, and also in diets, because that is a natural product that provides a wide range of essential nutrients, being very low in fat.

If you come to visit us at La Gomera, do not miss the opportunity to try some specialty based on the wonderful Canarian gofio.